Cigarette smoking is the main predisposing factor. In recent years, it has been recognised that passive smoking (e.g. from a first degree relative in a house of smokers) can also put people at risk. Generally, the risk increases with the number of cigarettes smoked.
Exposure to asbestos increases the risk of developing this tumour. The combination of asbestos exposure plus cigarette smoking is particularly harmful. Other occupational exposures such as exposure to metals including arsenic, chromium and nickel can also increase risk.
Some studies have suggested that diet can play a role in lung cancer risk. Though it is not known how it works, diets high in fruits and vegetables seem to decrease risk.
Radiation exposure damages the DNA material within the cells and can also cause lung cancer. Radon (a radioactive gas) exposure from our normal surrounding environment, if higher than normal, can predispose to lung cancer. This evidence is mainly based upon population studies which show that people living in areas with a high radon content are prone to increased incidences of a variety of cancers.

Patients with lung cancer may notice:

Rarely, patients may present with difficulty swallowing or wheezing. Patients who have metastases (distant spread) at diagnosis may have symptoms related to this spread. For example, patients with cancer spread to the bone may experience bone pain or fractures. 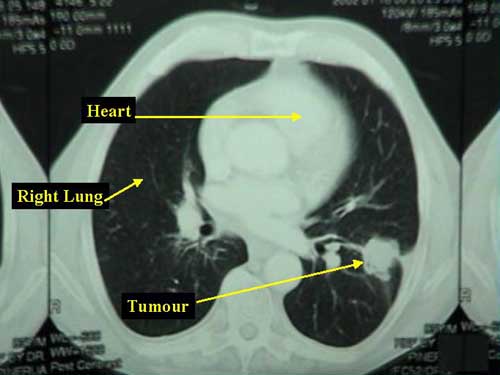 While imaging tests are helpful in raising the suspicion of lung cancer, diagnosis requires that cancer cells are seen under a microscope. There are a number of ways of obtaining samples of suspected cancer cells:

The prognosis (probable outcome) depends on the stage of the tumour. Cancer staging is a tool which allows prediction of patient outcomes, and helps decide on the best treatment options. It takes into account various features of a tumour in an individual patient, which can then be compared to other patients with similar tumour features.
Staging of non-small cell carcinoma of the lung is based on the TNM (Tumour, Node, Metastasis) system. ‘Tumour’ refers to tumour size, which is measured in centimetres. ‘Node’ refers to the presence of cancerous cells in regional lymph nodes. ‘Metastasis’ refers to the spread of cancer beyond regional lymph nodes to other organs of the body.

Using this classification, non-small cell lung cancers are grouped into stages as follows:

Using this system, outcomes are best for patients with early stages of disease, with small tumours, no spread to lymph nodes, and no distant spread (metastasis) to other organs. Outcomes are also better for younger patients.
Overall, 5-year survival for all types of lung cancer in Australia is 11% for males and 14% for females. Survival for non-small cell lung cancer is better than for small cell lung cancer. Different subtypes of NSCLC are also associated with different survival rates. Survival is best for adenocarcinoma, followed by squamous cell carcinoma of the lung and large cell carcinoma.

Management of patients with lung cancer requires interaction from many medical specialties such as medical and radiation oncology, respiratory physicians, cardiothoracic surgeons, palliative care specialists, psychologists and physiotherapists. The main treatment modalities are surgery (such as lobectomy), chemotherapy and radiotherapy.
Surgical treatment

New classes of treatment agents, such as biological therapies, are finding a place alongside chemotherapy. Watch this site for breaking news regarding this treatment.
Palliative care
Lung symptoms commonly reported by patients with incurable lung cancer include shortness of breath from pleural effusion, coughing, or haemoptysis (coughing up blood). Pain may be from the lung tumour itself, or from spread (metastasis) to other organs, including bone. Treatment is available for all of these symptoms. In some cases, radiotherapy may be used to manage cancer pain. Spinal cord compression is a complication of cancer spread to the spine which requires urgent treatment.

Drugs used to treat this disease:

Symptoms of This Disease:

Regimens Used in the Treatment of This Disease:

Treatments Used in This Disease:

Drugs/Products Used in the Treatment of This Disease: