Breathlessness is a common symptom of advanced cancer which is both distressing and frightening for patients and carers. Lung cancer is one of the most common cancers worldwide and one of the most difficult to treat. Breathlessness is particularly problematic in the later stages of lung cancer but may be present even early in the disease. Numerous other cancers may also lead to breathlessness if they spread to the lungs or heart or if they lead to the development of malignant pleural effusion or anaemia. Management focuses on treating your underlying cancer if at all possible, then controlling your breathing symptoms using drugs or by draining fluid from around your lungs. However, these approaches can prove inadequate if effort is not made to address anxiety and other emotional components of breathlessness.
Breathlessness (also called dyspnoea) refers to the sensation of difficulty breathing or shortness of breath. It is a subjective sensation so doctors rely on your description of your symptoms and cannot measure your level of breathlessness by any external means. Breathlessness is a common symptoms in lung cancer and other cancer related illnesses. Approximately half of all cancer patients complain of breathlessness at some point in time and it can be a particularly distressing symptoms for both patients and their carers.

In general, there are four main mechanisms that cause breathlessness in cancer:

Cancer of the lung and breast are the most common cancers to cause breathlessness. The former causes breathlessness by invading and obstructing airways in the lung. Breast cancer on the other hand, causes malignant pleural effusions rather than blocking an area in the lungs.
There are however numerous reasons why a patient with cancer may become breathless which can make diagnosis of the cause difficult for clinicians. The main reasons are listed below:

Treatment of breathlessness relies on an accurate diagnosis of the likely cause for the symptoms. In order to do this your doctor will take a thorough history and examine your breathing, respiratory system and heart. History will include details of your cancer, treatment to date and detailed questioning about the breathlessness including its onset, severity, timing, associated symptoms and affect on your daily activities. Your doctor may perform some basic tests and investigations to confirm the cause of your breathlessness. The most important of these is the chest x-ray which identifies the cause in the majority of cases. CT may be performed as they can more accurately detect obstruction and lung lesions. Your doctor may also use pulmonary function tests or bronchoscopy (looking into the bronchi) to detect obstruction.
Other tests that may help with a diagnosis include:

Treatment of dyspnoea in cancer patients concentrates on treating the cancer itself and addressing the underlying causes. A multidisciplinary approach is taken, with input from such disciplines as oncology, respiratory physicians, radiation oncologists, surgeons, and palliative care. Treatment of specific problems is highlighted below:

Pleural effusion
Fluid accumulation around the lung prevents it from expanding normally, giving it a sensation of shortness of breath. In cases of large pleural effusion, gas transfer can become compromised. Anti-cancer treatments can improve pleural effusions by killing cancer cells and reducing irritation of the pleura, eventually leading to absorption of the fluid and reduced size of the effusion. Large effusions may need to be drained surgically. 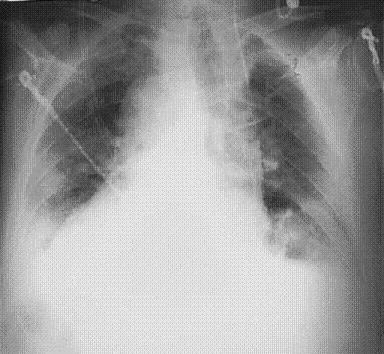 Obstruction of the airways
Airways obstruction may be relieved by shrinking the tumour itself using chemotherapy or radiotherapy or by relieving local obstruction using stents and laser. Treatment should be done to relieve symptoms and improve quality of life even if the cancer itself is not curative.

Lymphangitis/inflammation
Lymphangitis occurs when the lymphatic cells within the lung become thickened with tumour cells. Potent anti-inflammatory drugs such as steroids can reduce the congestion within the lymphatic ducts and improve breathing. Corticosteroids may also be used to decrease the amount of inflammation and oedema around a tumour. Steroids are considered the easiest and most effective drugs for treating dyspnoea but long-term use can cause several side effects that need to be considered.

In conditions where oxygen levels in the blood stream are reduced, symptoms can be improved with the administration of oxygen. Increasing the amount of oxygen breathed in into the lungs causes a larger diffusion gradient between the air in the lungs and the blood stream. This has the effect of causing oxygen to enter the blood stream quicker and increasing circulating oxygen levels in the blood. This can alleviate the shortness of breath. Caution must be taken in people with long standing conditions such as chronic obstructive pulmonary disease (COPD) as oxygen administration can impair respiratory drive. Thus oxygen is only used in patients with what is called reversible hypoxia.

Analgesia
Morphine or narcotic drugs (analgesic agents) are often used in cancer patients to relieve symptoms of breathlessness. Strong opioids such as morphine are also indicated to prevent and eliminate pain in cancer patients.

Patients with lung cancer can get breathlessness from a number of coexisting diseases. As fore mentioned, if the tumour is blocking the airways, bacteria can accumulate behind the tumour and lead to a localised pneumonia. This is also a cause of shortness of breath and should be treated with antibiotics. Often, especially in cigarette smokers, there is an element of emphysema or chronic bronchitis as well as the lung cancer. Sometimes this may respond well to bronchodilators such as Ventolin which opens up the airways.

Allergies
Serious allergic reaction? 11 ways of knowing if you’re having one

Eye Care
7 Common Eye Problems and What Causes Them