Chronic obstructive pulmonary disease (COPD) is a disease of the lung. The lungs are the organs found in the chest which are invloved in breathing. Air enters the nose and mouth, then travels to the lungs via the trachea, which divides into smaller airways called bronchi and, subsequently, bronchioles. (See diagram below). The lung tissue itself is a spongy material, consisting of a series of folded membranes (the alveoli) which are located at the ends of very fine branching air passages (bronchioles). COPD is a disease of the smaller airways in the lungs. 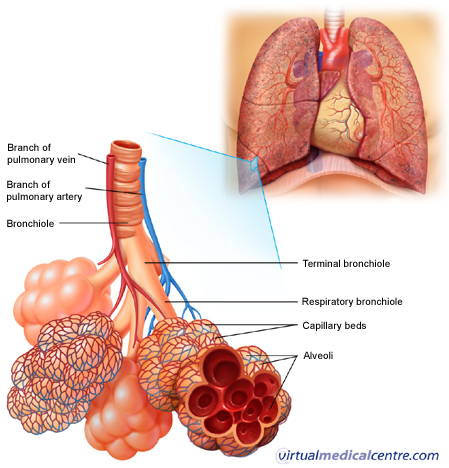 Chronic obstructive pulmonary disease (COPD) is a disease that consists of two pathologies:

These disease processes affect the bronchi and alveolar walls, respectively. The end result of both is the destruction of lung tissue and obstruction of the airways of the lung, leading to impaired gas exchange. The two conditions usually occur together, causing chronic airflow limitation.

Chronic obstructive pulmonary disease (COPD) is a major cause of disability, hospital admissions, and mortality in Australia. It is considered to be ranked third in the overall burden of disease (following heart disease and stroke). More than half a million Australians are estimated to suffer from moderate to severe disease. COPD ranks fourth among the common causes of death in Australian men, and sixth in women. The death rates from COPD in Indigenous Australians are up to five times that of non-Indigenous Australians.

The major cause of COPD is smoking. It is thought that around 10-15% of smokers will develop the disease. Furthermore, as rates of smoking-related diseases are increasing in women, it is thought that rates of COPD will also increase in women, perhaps eventually exceeding rates in men.

In susceptible smokers, cigarette smoking results in a steady decline in the ability of the lungs to function. Stopping smoking, even late in the course of the disease, may result in mild improvement in lung function and, more importantly, will slow the rate of decline in lung function. Sometimes your lung function can improve back up to the level of a non-smoker.

COPD usually starts when you are in your 50s or 60s. From this point, there is a slow and steady decline in lung function. This can eventually cause disability and impairments, but these are often unrecognised until late in the disease. It is likely that you will require long-term medication treatment. Note that if you are a smoker you may also suffer from lung cancer and cardiovascular disease (such as ischaemic heart diseases) on top of your COPD.

COPD can cause a number of complications:

The most common symptoms of COPD include cough, sputum production, wheeze and progressive breathlessness. Usually these symptoms develop gradually over several years before you even notice them. Often patients with COPD go to their doctor due to an acute illness or exacerbation, but careful questioning may reveal that these symptoms may have been present for a longer time. Your doctor will ask you detailed questions about the characteristics of your symptoms, their onset, duration and any precipitating factors.

Patients with COPD often have a smoker’s cough prior to the development of other symptoms. It is important that your doctor knows your smoking history as this helps the diagnosis, and also determines your risk of other disorders such as lung cancer. Certain activities may make you more breathless than others. In particular, activities involving arm movements above the shoulders (such as painting the roof) are difficult for patients with COPD. Walking on a treadmill or pushing a shopping trolley are sometimes easier as they allow you to brace your arms and chest and use other accessory respiratory muscles.

If your disease is advanced, even simple activities of daily living such as dressing can lead to severe breathlessness. Other symptoms may include susceptibility to colds and respiratory infections, and you may notice your breathlessness is worsened by foggy weather and pollution.

Your doctor will perform a detailed examination of your respiratory system. This will include undressing your top, inspecting your chest, measuring your chest expansion and listening to your breath sounds. Important signs your doctor will be looking for include:

Patients with COPD are often divided into two classes based on their clinical findings.

Patients with chronic bronchitis are classically described as “blue bloaters” due to the presence of cyanosis (blue discolouration) and oedema. They have reduced levels of ventilation and are not very breathless. There are low levels of oxygen in the blood and high levels of carbon dioxide, which can cause other signs, such as bounding pulse, asterixis (flapping of the hands) and, in severe cases, confusion and growing drowsiness.

Patients with predominantly emphysema, on the other hand, are described as “pink puffers” as they are very breathless and hyperventilate (with pursed lips), but have near normal levels of oxygen and carbon dioxide in the blood. However, these clinical signs aren’t always reliable and do not always correlate with pathology.

Your doctor may perform number of tests to confirm the diagnosis of COPD and determine the severity of airway limitation. Tests may include:

The prognosis of COPD is dependent on a number of factors. The degree of impairment of lung function (measured as FEV1) is probably the most important predictor of mortality. As forementioned, ceasing smoking is the best thing you can do to improve your lung function and chance of survival. Studies have shown that even in the most advanced disease, stopping smoking improves your symptoms and prognosis.

In addition, the presence of complications such as heart failure, respiratory failure and exacerbations are also important in your overall prognosis. In general, COPD is a severe and progressive disease, eventually leading to significant disability and reduced survival. Only about half of patients are still alive five years after the diagnosis of COPD. Death may be due to heart failure or infective exacerbations.

The majority of treatments for COPD are used to improve symptoms. Only quitting smoking and oxygen therapy in patients with advanced disease have actually been shown to alter the course of disease and improve survival. An overview of possible treatments that may be used for your COPD is outlined below:

Stopping smoking is the best thing you can do for your health and is considered the most important factor in treatment of COPD. Quitting smoking, regardless of the stage and severity of your disease, will slow down the rate of progression of disease, improve your symptoms and prolong your survival. Your doctor will provide you with education and advice on the importance of quitting smoking. They can also prescribe a drug called bupropion and nicotine replacement therapy (as patches, gum, lozenges, etc) to reduce your cravings. It is also beneficial to be involved in counselling and other supportive measures.

Drugs can be used for long-term suppression of symptoms or for treatment of acute exacerbations. Bronchodilators and corticosteroids are used to control symptoms. Your doctor will usually give you a trial of oral steroids to see if you respond before using long-term inhaled steroids. Antibiotics are taken for short-term exacerbations of disease. Your doctor may also prescribe agents to reduce the thickness of your sputum (called mucolytics). Studies have shown these agents may reduce the frequency of exacerbations.

Chest physiotherapy has been shown to help remove fluid in the airways. Various techniques are available such as steam inhalation, which assists sputum removal and improves your ventilation. Your doctor will also enter you into exercise or pulmonary rehabilitation programs which have been shown to increase exercise tolerance, relieve symptoms and improve your quality of life.

If you have severe airflow limitation you may require home oxygen therapy, sometimes for up to 19 hours per day. Oxygen can be administered via nasal prongs (small plastic tubes into your nose) or via a mask. This treatment has been shown to prolong life in patients with severe COPD who have stopped smoking. The best benefit from oxygen treatment is obtained if you have quit smoking. Furthermore, oxygen is flammable, so smoking is in fact dangerous during this treatment.

If you have severe COPD which is predominantly of the emphysema form, you may benefit from surgery on your lungs. Different operations are available such as bullectomy (which removes large, dilated bullae compressing on the rest of the lung) and lung reduction surgery (which removes severely affected areas of lung and can improve the elasticity of the remaining lung). Very rarely, patients with severe and terminal disease may get a lung transplantation. In appropriate patients, surgery can improve symptoms, enhance lung function and reduce mortality. Your doctor will be able to discuss whether surgery is suitable for you and your disease characteristics.

Everything You Need to Know About CTPA Scans…