Radiotherapy is primarily used in the treatment and ongoing management of cancer patients and their malignancies.
Radiotherapy is the use of ionising radiation in the treatment of cancer and is based on the ability of radiation to interact with the atoms and molecules of the tumour cells to produce specific harmful biological effects. Ionisation affects either the molecules of the cells or the environment in which the cell lives; that is, there is sufficient energy from the radiation to cause changes within the cell.
The international unit for radiation dose is Gray (Gy). Each type of radiation has its own unique characteristics. Your Radiation Oncologist will select different types of radiation dependent upon the area of the body they are treating.
For example, skin cancers are usually treated with electrons as they tend to deposit their energy on the surface. X-ray tends to deposit most of its energy in deeper tissue and is therefore, for example, very useful in the treatment of prostate and cervical cancers. The benefit of x-ray therapy is that a high dose can be delivered directly to the cancer with minimal direct dosing to the skin.

How is radiation produced?

Most Radiation Oncology Departments have machines called linear accelerators which are capable of producing x-ray or electron radiation on demand.
Once the machine is switched off, the radiation stops. That is why cancer patients are not radioactive when they leave the treatment room and there is no risk to the people who come in contact with them.
In contrast are radioactive isotopes. These come as an oral or intravenous preparation. For example, iodine – 131 which is used to treat overactive thyroids or thyroid cancer.
The radioactive isotopes can also be implanted directly into the tumour or into body cavities. This form of treatment is called brachytherapy. For example the implantable radioactive isotope wires Iridium-192 can be implanted into cancers of the tongue.
Caesium-137 is another example of an implantable radioactive isotope used in the treatment of uterine or vaginal cancers in conjunction with other therapies, i.e. chemotherapy.
If radioactive isotopes are left inside the person they will of course continue to emit radiation.
Therefore there are strict guidelines that need to be adhered to such as the type of hospital room used for their stay, contact time with family and nursing precautions.

How does radiotherapy work? 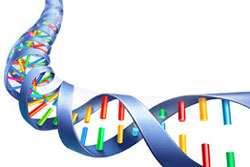 The majority of the cells in our body contain DNA (Deoxyribonucleic acid). DNA is also the principle target of ionising radiation. Radiation either directly disrupts the DNA activity or produces fast moving charged particles called radicals, which then disrupt the DNA activity.
Radiation tends to damage cancer cells more than normal cells because cancer cells are rapidly synthesising DNA, and hence have more targets for radiation. No doubt, some normal cells will also be destroyed and as a result side effects can occur.

Why does it take time for radiotherapy to work?

Radiation obviously has an immediate effect on the DNA and other targets. However, this does not immediately cause the irradiated cells to die. Even though the DNA is damaged at the standard dose of radiation used in cancer treatment, the rest of the cell structures remain viable and continue to work. It is only when the time comes for the cell to divide that it finds the very blueprint for itself (ie. the DNA) faulty and thus it dies. It may be up to a month before the cancer cells attempt to reproduce and then die. (Please note however that in certain tissues, radiation does induce a rapid death by other mechanisms. i.e. apoptosis)
The radiation damages cells that are actively dividing. We often discuss the phases of cell division as the ‘The Cell Cycle’.

What does radiotherapy involve?

Radiation is directed to the area in which the cancer is located through either external beam or implants. Radiotherapy works in a similar way to chemotherapy, in killing the cells that are actively dividing through the damage of DNA.
Radiotherapy doesn’t have the systemic side effects seen with chemotherapy, but this is not to say that radiotherapy does not have side effects. The side effects of radiotherapy are localised to the site of the tumour. For example, radiotherapy to a tumour in the neck may cause a sore throat but will not cause diarrhoea.
Radiotherapy is delivered either by external beam radiation, which is similar to the way an x-ray is taken (however in much stronger doses) by the insertion of radioactive implants (brachytherapy) or via isotope therapy.


What does radiotherapy involve?

External beam therapy in Australia is delivered by linear accelerators that accelerate electrons so that they hit a target, which is made of a special alloy. The resultant deceleration liberates energy in the form of gamma radiation, which is focused by the application of electromagnetic fields. The beam is then directed to the radiation field.

A linear accelerator – note the face masks hanging on the wall. 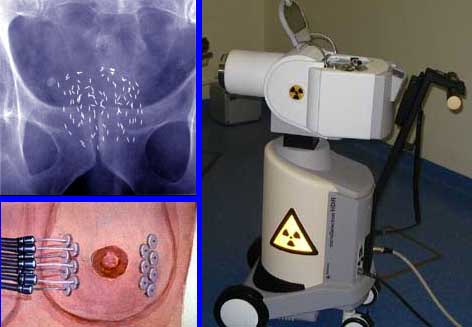 Therapeutic isotopes
This is the administration of a radioactive isotope into the body for therapeutic purposes. Examples include liquid Iodine-131 used to treat some thyroid cancers, or specific cases of hyperthyroidism and Phosphorus-32 used to treat Polycythaemia Rubra Vera. Future developments include the potential use of chemicals such as Boron-10, which concentrates in tumour tissue. The patient can then be irradiated with neutrons, which are absorbed by Boron. The Boron then emits higher energy particles, which irradiate the cancer.
Radiotherapy drugs:

Side effects of radiotherapy

As mentioned earlier, the side effects of radiotherapy are specific to the sites that are being treated. Potential for side effects increases with increasing duration of treatment, expected side effects usually appear 14 days after commencement of treatment and depend on dose, site and volume of treatment.
Some of these include:

Radiotherapy is not specific for cancer cells, and so can be dangerous to the normal cells of the patient. Procedures must always be followed that ensure the patient is only being exposed to the prescribed dose of radiation, and that this is being directed at the correct site. Radiotherapy generally has less systemic side effects than chemotherapy because of this direction. For this reason, it is possible for a patient to lead a relatively normal life (including getting pregnant providing the cancer is not in the pelvic region) whilst receiving radiotherapy.