What is prostate cancer (adenocarcinoma of the prostate)?

The prostate is a gland found only in men. It surrounds the urethra (the tube through the penis that drains urine from the bladder), and sits at the base of the bladder. The prostate is normally about the size of a walnut.
The function of the prostate is to produce fluid that forms part of the semen. This prostatic fluid, in addition to the fluid produced by the seminal vesicles, forms the fluid which carries the sperm when a man ejaculates.
An adenocarcinoma is a type of cancer that arises in the cells of glands. Most cells in the prostate gland are of the glandular type, which means that adenocarcinoma is the most common type of cancer to occur in the prostate. Cancer occurs when the genes of a cell become abnormal (mutation), causing the cell to multiply and interfere with the normal function of a tissue.
Once the cancer reaches a certain size, the abnormal cells can spread to other parts of the body and cause cancerous tumours to grow. This phenomenon is known as metastasis. If a tumour is capable of spreading to other parts of the body in this way, it is called malignant. Adenocarcinoma of the prostate is malignant, however many types grow extremely slowly, and so are unlikely to spread before a man dies of other causes. 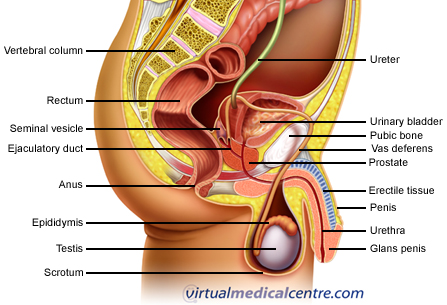 In Caucasians, smoking has been linked to a greater number of deaths due to prostate cancer.
Obesity may be linked with more aggressive forms of prostate cancer, but not with an increased incidence. The link between prostate cancer and diet has been extensively studied. Important findings include:

Other men who are at increased risk of prostate cancer are those who have had high PSA levels, or abnormal prostate biopsies in the past.
In the past, testosterone levels were thought to be related to the development of prostate cancer, but this does not appear to be the case. 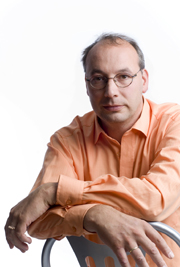 In many cases, prostate cancer spreads so slowly that it never causes illness, and the patient will often die of other causes before the cancer can cause death. However, if the cancer is left untreated, it is possible that it will spread to local pelvic lymph nodes, and eventually spread to other parts of the body (metastasise). This may eventually result in organ failure and death. Bony metastases  from prostate cancer are common. For men who choose not to undergo definitive local treatment, their likelihood of survival relates to the aggressiveness of the prostate cancer.
Without treatment, the 10 year disease-specific survival of men with grade 1 prostate cancer (Gleason score 2 to 4) is 87%, with metastases present in 20%. Of men with grade 2 cancer, 42% develop metastases at 10 years. Ten year survival with grade 3 prostate cancer (Gleason 5 to 7) is 34% without treatment.
Another study found that 40% of men who did not have treatment for their prostate cancer died from the disease after fifteen years. About 80% of men who chose radical prostatectomy survived.

Currently, most prostate cancers diagnosed have no symptoms. The cancer is detected due to abnormal PSA levels. In the past, prostate cancer was diagnosed due to an abnormal digital rectal examination (DRE), or due to the presence of urinary symptoms such as difficulty starting urine stream (hesitancy), urgent rush to get to the toilet (urgency), needing to pass urine frequently at night (nocturia), and dribbling of urine at the end of the stream (terminal dribbling). Remember, though, that these urinary symptoms are more commonly caused by benign prostatic hyperplasia (BPH) or by urinary tract infections.
Other symptoms that may raise suspicions of prostate cancer include new onset erectile dysfunction, blood in the urine (haematuria), blood in the semen (haematospermia), or symptoms of metastatic disease (e.g. bone pain).

The doctor will perform a digital rectal examination. This involves inserting a gloved finger into the rectum to feel the prostate and determine if it is enlarged or if there are any lumps. PSA and DRE are generally performed together to check for prostate cancer. PSA testing requires a blood test to be taken.

How is prostate cancer diagnosed?

A blood test is carried out to check the levels of prostate specific antigen (PSA). If a man’s PSA level is higher than 4 ng/mL, it may indicate that he is at increased risk of prostate cancer. However, most men with elevated PSA do not have prostate cancer.
If more investigation is needed, the next stage is usually a prostate biopsy, which is performed using ultrasound, via the rectum. A device is used to pass needles into the prostate, and withdraw them with tissue inside. The prostate tissue is examined under a microscope. If cancer is detected, it is given a Gleason score, which scores the cancer’s aggressiveness.
Serious complications due to prostate biopsy are rare. Hospitalisation (usually for urinary infections) or urinary retention occur in less than 1% of cases. One study found the following complication rates:

If cancer is identified on biopsy, the doctor will carry out further investigations, such as lymph node dissection or CT, to see if the cancer has spread.

Due to PSA screening, prostate cancer is generally being diagnosed earlier, and in younger men. The risk of a man being diagnosed with prostate cancer at some point in his life is 1 in 6 (17%), and 3% of men die from prostate cancer. At autopsy, one third of men under the age of 80, and two thirds of men over the age of 80, are found to have prostate cancer. This data suggests that most men die with prostate cancer, rather than from it. At five years, 99% of men diagnosed with prostate cancer are still alive. At 10 years, 95% are still alive.
Determining the degree of spread of the cancer is known as ‘staging’. Cancer that is confined to the prostate gland is generally curable. The prognosis is not as good if the cancer has spread locally. If the cancer has spread to other parts of the body such as the bones, it is very difficult to cure. Treatment is focused on slowing the spread of the disease, and men may still live for many years with a good quality of life.
The prognosis is also related to the grade of the cancer, represented by the Gleason score, which is a measure of how aggressive the cancer is. 40% of men with Gleason scores of 8 to 10 are alive and disease free at 10 years. More than 90% of men with localised tumours and Gleason scores of 2 to 4 are alive at 5 years.

Treatment options for prostate cancer include:

The risk of some small, non aggressive, localised prostate cancers ever spreading is very low. In these cases, the risks of treatment may outweigh the benefits. A doctor may therefore recommend ‘watchful waiting’, also known as ‘active surveillance‘.
In watchful waiting, the cancer and PSA levels are monitored, but no active treatment is carried out. This may be particularly appropriate for men who have a life expectancy of less than 10 or 15 years, due to advanced age or other medical problems.

If a man chooses to have treatment for prostate cancer, the main options in Australia include surgery, radiotherapy and hormone therapy. There is no good quality evidence that one approach is better than another, so treatment choice is based on the following considerations:

Radical prostatectomy (RP) involves removing the prostate via a lower abdominal incision, or via keyhole surgery (laparoscopic). RP generally involves a 4–8 day hospital stay. A urinary catheter (tube through the penis into the bladder) with a urine bag attached remains in place for at least 2 weeks after the operation. Death rates due to radical prostatectomy are 0.5%, increasing to 1% in men over 75 years.
Sexual dysfunction may occur in 20–70% of patients following RP, and urinary problems in 15–50%. Bilateral nerve sparing surgery may be possible in some cases. In some cases, RP may be followed by radiotherapy.
See also Robotic Radical Prostatectomy.

External beam radiation therapy (EBRT) may be used with RP or hormonal therapy to treat prostate cancer.
Beams of radiation (like x-rays) are targeted at the prostate by a machine that moves around the body. The rays kill the cancer cells. Small tattoos may be placed on the skin to make sure the beam is in exactly the right place, and minimise damage to healthy tissue.
This procedure is performed in an out-patient setting, and men are usually able to maintain their normal activities. Radiotherapy may lead to sexual dysfunction in 20–45% of cases, urinary incontinence in 2–16%, and bowel dysfunction in 6–25% of men who were previously normal in these areas.
For further information on EBRT, see Radiotherapy for Prostate Cancer.

There are two main types of brachytherapy:

For further information on brachytherapy, see Radiotherapy for Prostate Cancer.

Hormone therapy may be used in addition to EBRT. It is also used as palliative treatment (i.e. treatment for prostate cancer that cannot be cured). Hormone therapy does not improve outcomes when used before surgical treatment.
Testosterone appears to drive the growth of prostate cancer. Androgen deprivation therapy (ADT) aims to lower levels of testosterone. This may be achieved by removing the testes (often replaced with prosthetic testes) or medical castration with drugs.
Side effects of ADT include hot flushes, loss of libido, weight gain, erectile dysfunction, gynaecomastia, fluid retention, osteoporosis and mood swings. 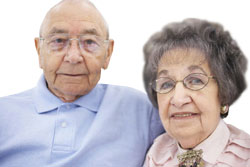 Sometimes, prostate cancer is diagnosed and is too advanced to be cured by surgery or radiotherapy. In these cases, treatment is referred to as ‘palliative’. Palliative treatment is designed to relieve symptoms, maintain quality of life and, in many cases, prolong life. It will not cure the disease.

Relative side effects of different treatments

Good quality evidence of the best approach to prostate cancer is limited, but the following treatment strategies have been suggested: