Allergy and the immune system

Introduction to allergy and the immune system 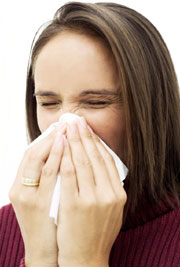 The adaptive (also called humoral or specific) immune system is typically only involved in immune responses to bacteria, bacterial toxins and virus antigens. It involves the production of antibodies (also called immunoglobulins) against a specific target. The target of an antibody is called an antigen. The antibodies circulate in the blood and react with their specific antigens, for example an antibody produced to mount an attack on the bacteria salmonella, will only attack salmonella and not other types of bacteria.
For the most part, the immune system protects the body from bacteria and foreign particles and are well controlled and directed against harmful pathogens. The immune response usually results in the pathogen being cleared from the body and subsequent resolution of the inflammatory processes which are involved in the immune reaction. However, in some individuals the innate immune system responds abnormally and mounts a response to particles in the environment which would not normally stimulate a response. This abnormal immune response causes allergy.

The innate immune system regulates the body’s initial response to pathogen exposure and is responsible for catalysing the sensitisation process which leads to allergic reactions. This is a non-specific response which involves recognition of molecules entering the body that are shared by a group of pathogens. The immune system recognises these molecules because they are not found in the cells of the human body. This type of immune reaction is distinct from the reactions which occur in recognition of specific pathogens such as salmonella.
Innate immunity is developed in the human body at birth and does not adapt or improve with ageing, unlike acquired immunity which develops throughout life as a result of pathogen exposure. For example, the skin and mucosa are tough, intact anatomical barriers which provide innate immunity and are in place at birth, as are mechanisms for mechanical removal of pathogens (e.g. sneezing and coughing, vomiting, mucus removal). On the other hand, antibodies to pathogens like salmonella only develop upon exposure to those pathogens, for example when an individual eats food contaminated with salmonella.
While anatomical barriers of the innate immune system can be seen with the naked eye, the innate immune system also functions at the cellular and molecular level. Important cells and molecules involved in innate immune responses include:

Hyper-responsiveness of the innate immune system and allergy

There are some circumstances where an exaggerated adaptive immune response is mounted against an otherwise harmless molecule. The harmless molecule is ignored by the innate immune system in the majority of people, but in some leads to an exaggerated response which causes tissue damage in the person’s body and in rare cases death. When these exaggerated and inappropriate immune reactions involve allergens such as dust and pollen they are termed allergic reaction or type 1 hypersensitivity reaction.

Allergic responses occur following sensitisation; that is, development of adaptive immunity (antibodies) to a particle (e.g. dust, pollen) which would not normally cause an immune response. Sensitisation occurs when an individual is exposed to a specific particle for the first time, and the body mounts an inflammatory response. If the body mistakes a harmless particle for a harmful substance the initial response by the innate immune system causes the production of IgE antibodies by the acquire immune system. The IgE antibodies produced are specific to the antigen, for example if it is pollen from a sunflower; the IgE antibodies produced only attack particles of pollen from sunflowers.
The specific IgE antibodies then inhabit mast cells. Mast cells have a large role in both allergy and the immune system. Mast cells are partly responsible for linking the innate immune system (to do with inflammation) and the acquired immune system (which is very specific and tightly controlled by antibodies). Mast cells which have been inhabited by IgE antibodies cause allergy by perpetuating an increasingly sensitive allergic response upon future exposure to the specific antigen.

The early phase response is mediated by IgE antibodies. It usually recovers within 2-4 hours. Mast cells also have a large role in allergic reactions as IgE specific antibodies for antigens inhabit these cells following sensitisation. When an antigen enters rthe body on subsequent occasions it interacts with specific IgE antibodies on mast cells. This leads to mast cell degranulation (rupture) and the release of inflammatory mediators. When this interaction leads to allergic disease, the antigen is then called an allergen. 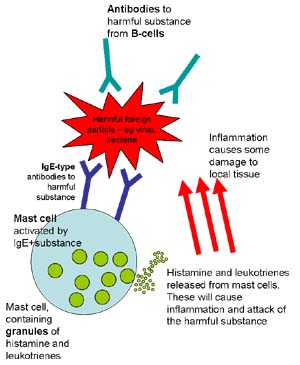 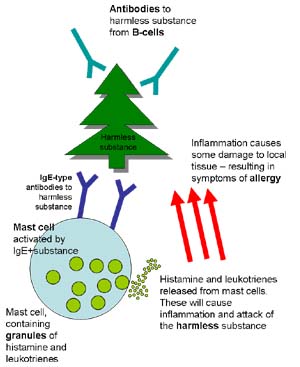 The late phase response occurs several hours later, usually starting 4 hours after contact with the allergen. It can last 12 to 24 hours in some individuals. This response occurs in response to inflammation, which catalyses the recruitment of phagocytic cells (white bloods cells including eosinophils and T lymphocytes) to the site of the allergy (e.g. the lungs in asthma). The white blood cells release inflammatory mediators, including mast cells, that lead to continued allergic symptoms. For example, mast cells produce cytokines which stimulate further IgE antibody production by B cells (cells that function to produce a wide range of antibodies).

IgE production by B cells during the late phase of allergic reactions causes a secondary immune response. Exposure to an allergen and the associated inflammatory response have a threshold-lowering effect in relation to future exposure; meaning that affected individuals become more sensitive to the allergen with increasing exposure.

The tendency to develop allergic reactions has a strong hereditary factor. This tendency is termed atopy. Atopy is diagnosed in individuals who develop an allergic reaction to an allergen in a skin prick test (when the skin is pricked and exposed to the allergen). But not all individuals who develop allergic reactions to skin prick are affected by allergy to particles in the environment. Approximately 20–30% of the population is atopic, and two-thirds of atopic individuals have allergic disease.
It is still unknown why some people have this abnormal reaction to harmless substances in the environment, or why certain substances are more likely to cause allergies than others.

Some common allergens include:

Important allergic diseases include allergic allergic asthma, allergic eczema, allergic rhinitis and conjunctivitis, food allergies and anaphylaxis.3 Diagnosis of these conditions is made on the basis of clinical history and examination in conjunction with skin-prick testing or measurement of IgE in a blood test

These are some of the terms you may hear when doctors discuss allergies: 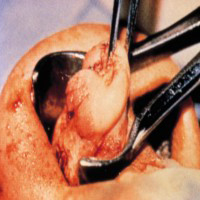 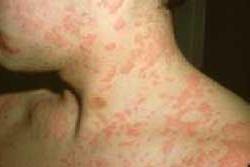