The short-term effects of alcohol

Alcohol is a legal drug in Australia and is commonly consumed by Australians for pleasure and sociability. When consumed in moderation the effects of alcohol are positive, after one standard drink individuals will feel relaxed, confident and talkative. One standard drink consumed in 1 hour will raise the blood alcohol concentration (BAC) of an individual with average build by approximately 0.01 to 0.03%. As the amount of alcohol consumed in a single sitting is increased, the BAC increases proportionately.
Once the BAC has surpassed 0.05%, inhibitions are reduced and judgement and movement are impaired. An individual with a BAC of 0.08–0.15% may exhibit slurred speech, impaired coordination and loss of balance, impaired vision, emotional instability, nausea and vomiting. With a BAC over 0.15%, individuals are classified as being in a high-risk state of intoxication. They may become sleepy, have trouble walking without help, lose bladder control and experience loss of memory and loss of consciousness.
A BAC in excess of 0.3% can lead to coma and death.

The most immediate effect of alcohol is on an individual’s cognition (thinking). Drinking alcohol stimulates the release of endorphins and results in feelings of relaxation, increased well-being and reduced inhibitions. Consequently, alcohol consumption can increase an individual’s tendency to engage in risky behaviours.These effects are more prominent in younger individuals who have not developed cognitive processes such as rational thinking and problem solving at a mature level.Individuals under 15 years take greater risks and engage in more anti-social behaviour when consuming alcohol.
Cognition progressively deteriorates with increasing alcohol consumption. Large quantities of alcohol can produce a blackout effect, resulting in the individual being unable to remember what they were doing for a period of time whilst intoxicated.
An individual’s cognitive and verbal ability to deal with conflict also deteriorates with increasing alcohol consumption and the risk of violent conflict increases.

As the quantity of alcohol consumed increases, positive feelings such as increased well-being are overtaken by negative physical effects including: 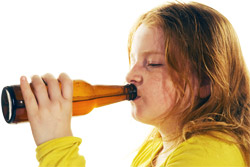 It is important to note that there are age differences in the effects of alcohol.
Young people tend to maintain their motor function better than their older counterparts who have consumed the same amount of alcohol. Young people also appear less affected by the sedative effects of alcohol. They may therefore stay awake for longer than their older counterparts when consuming alcohol. They may also be more likely to rely on motor skills while intoxicated, unaware of their impairment. For example, a young person might be more likely to think they are capable of driving a car when they are intoxicated.

As a result of this increased accident rate, intoxicated individuals have a higher risk of injury to the head, spinal cord and soft tissues. Alcohol intoxication is also associated with higher all-cause mortality from associated injuries and death from suicide.
Drinking no more than two standard drinks on any given day reduces the lifetime risk of alcohol-related injury to less than 1% (the level of risk designated acceptable by the National Health and Medical Research Council or NHMRC) in healthy men and women. Drinking less reduces the risk further.
Drinking more than two drinks per day increases the risk of alcohol related injury to greater than 1%. Drinking more than four standard alcoholic beverages in a single sitting more than doubles the risk of injury in the following 6 hours. The risk increases further if more drinks are consumed. Young people have a higher risk of alcohol related injury and greater than 50% of serious alcohol related injuries in Australia occur in individuals aged 15–24 years.

The rate of alcohol related death rose in the UK from 6.9 deaths per 100,000 people in 1991 to 12.9 deaths per 100,000 in 2005. In the United States, some 90,000 deaths each year are attributed to alcohol abuse. Alcohol-related death is also a significant public health issue in Australia.
The lifetime risk of death from alcohol-related injury increases from less than 1% amongst those who drink once a month or less, to over 5% and 10% amongst female and male daily drinkers, respectively. The risk of death remains less than 1% amongst men and women who never consume more than two drinks in a single sitting.

Alcohol-related death is a particularly acute problem amongst young people. In Australians aged 14–17 years, 13% of deaths can be linked to alcohol consumption. Each week a 14–17 year old Australian dies from an alcohol-related cause and a further 60 are hospitalised. 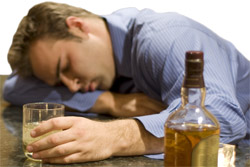 Alcohol consumption also increases the degree to which individuals take sexual risks. Young people who use alcohol on average:

Young women who consume alcohol are more likely to experience pregnancy as a teenager. The association between teenage pregnancy and alcohol consumption may arise because individuals who consume alcohol are predisposed to other risky behaviours, including unprotected sex.
There is also evidence that men become more sexually aggressive when drunk and women who are drunk are more likely to condone male sexual aggression.
The risk of sexual coercion for females increases with intoxication and alcohol is particularly likely to be involved in instances of acquaintance rape. Over half of all rape cases on university campuses in the United States (most of which are acquaintance rapes) occur after the victim, perpetrator or both have consumed alcohol.

Alcohol consumption and excessive daily alcohol consumption are associated with an increased risk of mental health conditions. In addition those who binge drink are more likely to attempt or complete suicide.
There is also evidence that individuals with existing mental health conditions are more likely to consume excessive quantities of alcohol, sometimes as a form of self-treatment. While the associations between mental health conditions and excessive alcohol consumption are often long-term, they result in an immediate increased risk of suicide, particularly amongst young people. Adolescent males and females are 17 and three times more likely to attempt suicide whilst intoxicated respectively. In these instances, depression and intoxication appear to work synergistically to greatly increase a young person’s risk of suicide.

Alcohol and the community

The short-term effects of drinking not only affect the individual who is consuming the alcohol but can also affect the community. Over 70% of the prisoners in Australia had a positive BAC before they committed the crimes that led to their imprisonment. 40% of domestic violence cases and 16% of child abuse cases involve alcohol.
Drinking can also lead to a hangover the day after the alcohol is consumed. Hangovers can contribute to loss of productivity in the workplace as well as in the classroom.

These symptoms can occur before the individual has passed out. This is common during binge drinking. It is also important to remember that alcohol is a depressant and can inhibit breathing and the gag reflex, which increases the risk of coma and choking.

Who is at risk? 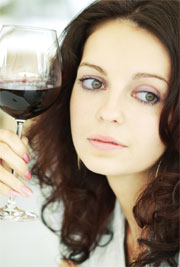 Everyone who consumes alcohol, and particularly those who consume alcohol in excess of recommended levels, is at risk from the intoxicating effects of alcohol. This is regardless of age, sex, race or income. However some individuals have higher levels of risk than others. These include: