Ultrasound is the name given to high frequency sound – defined as sound with a frequency over 20 000Hz. Sounds with this frequency are too high in pitch to be heard by the human ear. (For comparison, middle-C on a standard piano is 261.626Hz.) These waves can be transmitted in beams (like light) and are used to produce live 2-D images of the internal organs. Recently it has become possible to generate 3-D images by means of ultrasound. The ultrasound pulse travels through the body and echoes off the internal organs. These ultrasound echoes are then recorded and displayed as a live image. It is used across a wide range of medical specialties including obstetrics, gynaecology, cardiology, surgery, and gastroenterology. Ultrasound is favoured in these areas as it is a safe and relatively inexpensive imaging method.

For medical diagnostic purposes, frequencies used in Ultrasound scanning are in the range of 2.5-10MHz (2.5 to 10 million hz). Very short bursts of sound lasting around one millionth of a second are transmitted into the patient approximately 500 – 1000 times a second. As the sound travels in the body, it is reflected at the junction of different the tissues, to produce echoes which are picked up by the transducer.

The sound is reflected because different tissues carry sound at different rates. These echoes need to be electronically amplified in the scanner. The echoes that come from deep within the body are more attenuated that those from more superficial (or shallower) parts and therefore require more amplification. When the echoes return to the transducer, it is possible to reconstruct a 2-D map of all the tissues that have been exposed to the ultrasound pulse. The information is stored in a computer and then displayed as an image on a television monitor. Stronger echoes appear as brighter dots on the screen.

Ultrasound waves are produced by a piezoelectric transducer which is capable of changing electrical signals into mechanical waves (ultrasound). The same transducer can also receive the reflected ultrasound and change it back into electric signals. This effect – known as the piezoelectric effect – is displayed by a number of naturally occurring materials. However, it occurs with a much greater efficiency in some specially developed of synthetic materials, in particular lead zirconate titanate (PZT – the chemical symbol for lead begins with a P). PZT has been used as the active agent for the generation of medical ultrasound pulses for the last four decades.

Ultrasound is an extremely useful means of diagnostic imaging. It is widely used in obstetrics, for fetal imaging and to guide diagnostic procedures, (see obstetric ultrasound and amniocentesis) as well as gynaecology. As fluid is a good conductor of sound, ultrasound is particularly good for differentiating between cysts and solid structures and viewing fluid-filled structures such as the bladder, or the fetus in the sac of amniotic fluid.

Examples of Ultrasound Use

An image of an ultrasound of a fetus is shown below. 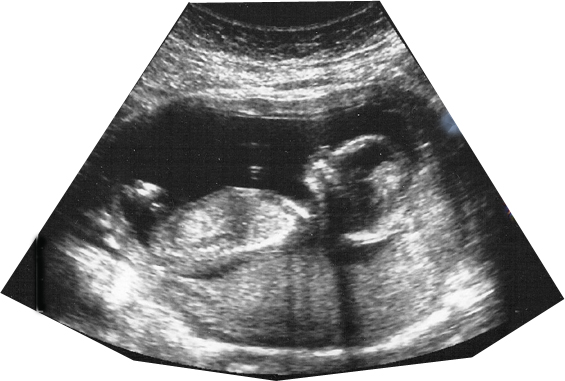 An ultrasound can be used to detect abnormalities in the:


Preparing for an Ultrasound

Preparation for an ultrasound is different when different parts of the body are to be examined. To allow transmission of the ultrasound through the body, and ease movement of the transducer, gel (acoustic coupling agent) is always applied to the patient’s skin. No other preparation is required for ultrasound of the pericardium (the tissue around the heart – this scan is called an echocardiogram) or pleura (the layer around the lungs). Also, for a renal ultrasound (an examination of the kidneys), no preparation is required. However, for ultrasound of the bladder, the bladder must be full. The patient should be examined one hour after drinking 4-5 glasses of water. The only other alternative is to fill the bladder – through a urethral catheter with sterile normal saline. Catheterization is avoided if possible as it increases the risk of a urinary infection. Similarly, for a transabdominal gynaecological ultrasound, the bladder should be full. However, for a transvaginal gynaecological ultrasound, the bladder should be empty. (In the case of a transvaginal ultrasound, a condom covers the transducer and gel is applied over the sheath.) For any abdominal ultrasound (e.g. abdominal aorta, liver, spleen, bowel), the patient should take nothing by mouth (food or drink) for 8 hours preceding the examination. If fluid is essential to prevent dehydration, only water should be given. Infants should be given nothing by mouth for 4 hours preceding the examination.

As ultrasound is non-invasive and involves no ionising radiation. It is an extremely safe method of medical imaging. At the energies and doses currently used in diagnostic ultrasound, no harmful effects on any tissues have ever been demonstrated, over a very long period of use. This is another reason why it is ideal for fetal imaging, and indeed, is usually considered the only scan safe for pregnant women. Apart from its safety, ultrasound is also the method of choice for seeing many internal organs. Ultrasound provides high quality images of internal organs that some other scans such as MRI‘s cannot achieve. Finally, compared to many other techniques, it is relatively inexpensive – meaning it is very widely available.