What is Pancreatitis (Chronic)

Chronic pancreatitis is a chronic inflammatory process of the pancreas. It is a similar, but more low-grade, ongoing process than acute pancreatitis, characterised by recurrent symptoms of abdominal pain, with progressive damage to the pancreas which in the end often results in pancreatic insufficiency. 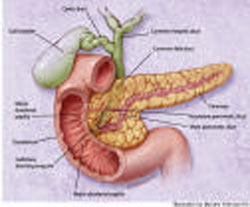 The pancreas is important for the digestion of nutrients in the gut (by secreting digestive enzymes into the duedenum), as well as for regulation of blood glucose (by secreting regulatory hormones such as insulin and glucagon). Hence, the end result of the process may be malabsorption of nutrients and/or diabetes mellitus.

This condition is not nearly as common as acute pancreatitis. Its incidence is around 4 per 100,000 overall, with a male to female ratio of three to one. Among alcoholics the prevalence is much higher.

The most important causative factors are:

There are exacerbations and remissions ultimately leading to chronic abdominal pain which can progress to malabsorption and diabetes. Pseudocysts (fluid filled cavities due to inflammation lined by scar tissue) form frequently – and these may require surgery or less invasive needle aspiration to be removed.

If alcohol abuse is the cause – if the patient can abstain from alcohol there is some evidence that the severity and frequency of the painful episodes will decrease.

How is Pancreatitis (Chronic) Diagnosed?

Chronic pancreatitis is mostly a disabling condition rather than a life-threatening one. With progressive gland destruction there will be malabsorption of nutrients and also diabetes – but these can be managed with dietary/enzyme supplements and insulin respectively.

How is Pancreatitis (Chronic) Treated?