What is Oppositional Defiant Disorder (ODD)? 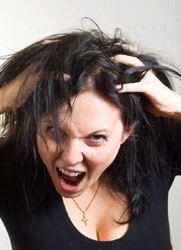 Oppositional defiant disorder (ODD) is a behavioural disorder characterised by a ongoing pattern of defiant, disobedient, and hostile behaviour beginning in childhood or adolescence. It is part of a group of disruptive behaviour disorders that also includes attention deficit hyperactivity disorder (ADHD) and conduct disorder. Of these three, ODD is seen as the most gentle.

ODD is one of the most common childhood behaviour disorders. About 10.2% of all children will develop ODD, with the condition occurring slightly more commonly in boys (11%) than girls (9%). The true rate of ODD is still debated. Commonly, ODD is quoted as affecting between 2 and 16% of all children. It was once thought that the condition affects mainly boys, but it is now being recognized that girls also develop ODD, though they display a different pattern of ODD behaviour to boys. It now seems that girls and boys are equally affected.

As with all behavioural conditions, specific risk factors for ODD have been hard to find. It is likely that the condition is due to numerous different factors that all play a small role. Biological, psychological and social factors should be considered.

Biological predisposing factors for ODD have shown mixed results. Genetics may be implicated in ODD as the condition tends to run in families; however, the results of formal research has been inconclusive.

Other factors such as exposure to toxins (e.g. nicotine) in the uterus or a lack of specific vitamins are not supported by research. There is a link between levels of lead a child is exposed to and how aggressive they are, but any link to ODD is yet to be proven.

There have been several theories about what psychological factors predispose to ODD, including insecure attachment to the mother or an unresponsive parent, but these theories have not been proven.

It does, however, appear that children with ODD have a different way of processing information. These children tend to ignore other people’s body language, generate fewer solutions to problems, and expect to be rewarded for aggressive behaviour.

Social factors also predispose to ODD. These include socio-economic factors such as poverty or violence in the local community. On a family level, an aggressive family environment, lack of parental supervision, lack of encouragement, inconsistent discipline and outright child abuse are all linked with ODD. Rejection by peer group friends is another significant risk, with children who are consistently bullied or ignored by peers often developing aggressive behaviour and ODD.

ODD is often associated with another disorder, most commonly ADHD, with some 40% of children with ODD also having ADHD.

Debate still exists over the existence of ODD in adults. Unlike conduct disorder or attention deficit hyperactivity disorder, ODD has no clear adult counterpart and the key features of ODD (such as disobedience and hostile behaviour towards an authority figure) are largely viewed as only applicable to children and teenagers. However, there is now growing research that ODD also exists in adults. As in children, these adults often have co-existing mental health conditions, including , antisocial or borderline personality disorder, anorexia and depression. More research is required to fully understand ODD in adults.

1. How Will ODD Affect the Child?

The typical behaviour of children with ODD includes:

These behaviours are usually directed against others that are well known and not against total strangers.

It is important to realise that the behaviour is often very different between boys and girls.

For a child with ODD, the main problems include having difficulty controlling their temper, and agitation. The child will probably be in trouble at school for arguing with teachers or fighting with other students. The child may find it difficult to understand others’ body language and may not quite understand why they are getting into trouble so often.

2. How Will ODD Affect the Parent of the Child?

As the parent of a child with ODD, you will be faced with your own set of challenges. Controlling your child will be difficult and you will most likely be facing numerous arguments with your child. The key will be to achieve clear and consistent parental discipline, although this will doubtless prove challenging.

3. How Will ODD Affect an Adult Who Has ODD?

An adult with ODD will face similar challenges. The typical adult behaviour includes:

The diagnosis of ODD is made based on long interviews with the child, their parent or caregiver, and possibly their teacher. This is complicated by the fact that ODD often co-exists with ADHD, anxiety or depression, and it can become difficult to determine if the child has ODD or if the behaviour is due to something else. If the child is too young for a formal interview then a play session is often used.

Numerous tools have been developed for assessing children for ODD (and other disorders such as ADHD). In Australia the more commonly used tools include:

Children with ODD are also at a much higher risk of developing other mental illnesses, including depression and anxiety.

The treatment of ODD includes both psychological programs and medications. The important psychological interventions include individual, parent and family based therapies. As discussed earlier, ODD often exists alongside ADHD, anxiety or depression. It is important that in these children, treatment includes a program to treat all the co-existing conditions.

This is an important part of treatment of ODD and includes several aspects:

It has long been considered that individual therapy only works in younger children and not in adolescents with ODD. However, recent research has found that this is not necessarily true. The program that was tested included 16 two-hour sessions that covered a number of different skills including manners, listening skills, interpersonal skills, controlling emotions and coping with stress. The sessions included both formal teaching and discussion groups. More than 70% of the teenagers who went through the program showed significant improvement in behaviour over the 16 weeks. Although only a small and short term program, it demonstrated that individual therapy can be applied successfully to teenagers.

Although individual therapy is useful by itself, it becomes far more powerful when combined in a broader treatment plan with the other forms of therapy.

It has been found that parent therapy has significant long term benefits for both the child and the parents.

It is logical that if individual therapy and parent therapy are both useful alone, then combining the two is even better. This is certainly true. Family therapy includes aspects of both individual therapy and parent therapy, and also introduces family-oriented problem solving skills and communication skills. Family therapy is seen as the most effective therapy for ODD.

The ADHD medication atomoxetine (Strattera) has been studied and appears to improve the behaviour of children with both ODD alone and ODD co-existing with ADHD. However, other stimulant medications are of no real benefit in ODD and may worsen the behaviour of some children who have both ODD and ADHD. Other medications have also been studied but are not considered to be treatments for ODD. It is highly recommended that psychological therapy be used as the main treatment for ODD.