Introduction to psychostimulants for ADHD

It is essential that an accurate diagnosis of attention deficit hyperactivity disorder (ADHD) be made and confirmed before medication is commenced.

Psychostimulants are medications that increase the amount of chemical messengers to stimulate certain areas of the brain. There is good evidence that psychostimulants can reduce symptoms of inattention and hyperactivity/impulsivity by enhancing certain chemical messengers in the brain. There is little evidence, however, that medications alone have a long term benefit on an individual’s academic performance. It is important that additional family education about the disorder, well-planned behavioural interventions, and support are used.

There are two types of psychostimulants:

The first medication that may be used for treating an individual with ADHD is either dexamphetamine or methylphenidate. The effect of these medications is to increase the capacity to attend, decrease impulsiveness, and reduce activity. General behaviour, and interactions with peers and parents, may also improve. If an individual does not respond to one of these drugs, the other may be tried.

Due to the anorexic properties of these medications, doses should be taken after breakfast and lunch. The medication will be started at a low dose, then gradually increased until a satisfactory response is achieved.

Adverse effects include headaches or abdominal discomfort. However, many patients become tolerant to these effects without the need to reduce dosages. Following your doctor’s instructions is important for achieving the best therapy, and discontinuation of a psychostimulant should be done slowly to avoid withdrawal side effects. 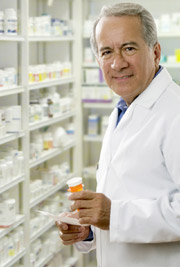 The doctor may start therapy with a short acting immediate release form of methylphenidate. Once stabilised on an optimum dose, a switch may be made to a single morning dose of a long acting modified release methylphenidate preparation. 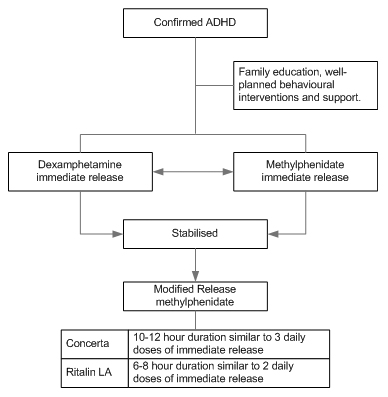 For further information, talk to your doctor.