There are four major causes of chronic kidney disease:

It is important to understand the anatomy of the kidney so that you know how the diseases affect it. Chronic kidney disease affects the two fundamental parts of the kidney called the glomerulus and the tubules. There are millions of glomeruli in each kidney, and these are very small bundles of tiny blood vessels through which blood is pumped. The pressure in this bundle of vessels is very high, and so some of the fluid gets pushed out of them (along with various substances that the body wants to dispose of) and this fluid is collected in the tubules.

The tubules further filter this fluid, removing some substances that the body wants to keep, and disposing of some toxins that it wants to get rid of including urea and creatinine. Much of the water is reabsorbed, leaving a concentrated mix of minerals, salts and other substances that the body wants to get rid of. Usually, protein is reabsorbed and kept in the body.

In CKD, this filtration process breaks down and so the glomeruli and tubules do not work as well. Toxins (such as urea) can start to build up and cause problems, and the kidneys can start to ‘leak’ protein into the urine. All this can lead to some very severe problems with the balance of the chemical environment inside the body.

Initially CKD is asymptomatic; that is, in the early stages of the disease you will not have any symptoms.

As many as 11.2% of Australians may have reduced kidney function, and 1 in 3 people are at an increased risk of getting it in the future. In Australia it is estimated that approximately 10% of people visiting their General Practitioner (GP) have CKD, with most of these patients unaware of their disease. As many as two million Australians have some form of chronic renal disease that is undiagnosed.

End stage kidney disease (ESKD) is much more common in men than women, with approximately 14 in 100,000 of the male population treated for ESKD compared to less than 8 per 100,000 women.

There are lots of risk factors that can cause, or mean you are more likely to get, CKD.

The major non-modifiable risk factors (things that you cannot change) include:

The major modifiable risk factors (things that you can change) include:

Other factors that have been shown to increase your risk of developing CKD include low socioeconomic status and environmental factors such as poor access to exercise and fresh produce and increased exposure to noise and air pollution.

Other factors are actually the cause of initial kidney damage, and so pave the way for chronic renal disease in the future. There are many causes of this, and can be divided up as follows:

Usually, whenever CKD has begun, it will continue until end stage kidney failure occurs, especially once the amount of blood the kidney is filtering drops to 80–90% of what it usually is. There are a few reasons for this.

One way (shown below), is that after some of the glomeruli (filters) of the kidney have been damaged, the other glomeruli have to pick up some of the slack and filter more blood. The way they do this is by stopping blood from leaving as easily, leading to an increase in the pressure within the little bundle of blood vessels. While this works for a while, eventually the pressure causes the cells to push apart a little and increase the passage of other things that should usually stay in the blood. 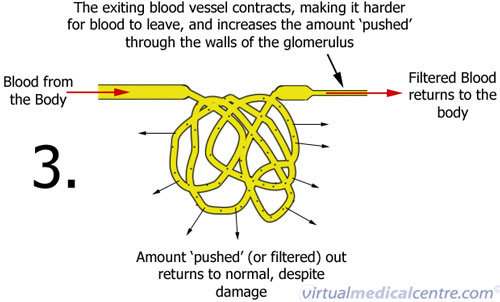 One of the things that is allowed through is a larger amount of protein. This protein can actually lodge in the tissue that is around the glomerulus where it can cause inflammation. This inflammation attracts white blood cells and causes the release of inflammatory chemicals that further damage the glomerulus. Some of these chemicals also start the formation of substances that can clog up the glomerulus, making it less effective at filtering blood. The tubules can also become inflamed and change their chemical makeup leading to them being very ineffective at filtering.

The best predictor of decline in renal function is the measurement of a blood chemical called “creatinine” over time, which gives a good indication of renal function. Creatinine is a substance that is created in the body naturally, and usually filtered out by the kidneys. If there is damage to the kidneys, however, and they are filtering poorly, then the creatinine in the blood rises. This means that testing the creatinine in the blood can give a good idea as to how the kidneys are functioning. The results may be graphed to determine the time course of progression.

Sometimes in the early stages of CKD, there are absolutely no symptoms at all. Usually it is only when the level of urea (which is a toxic chemical usually filtered out by the kidneys) increases quite a bit, which is called uraemia, do you start to get symptoms. However, when that level is reached, there can be symptoms such as:

More severe symptoms occur when the level of urea gets even higher, and can include:

There aren’t actually very many signs that a doctor can look for when they are checking for CKD. They may look at your skin and eyes to see if you look pale from anaemia, there may be some brown discolouration of the nails, scratch marks from itching, swellings in your legs or changes in the way your heart sounds.

They may also want to check that your nervous system is still working correctly by assessing how strong your muscles are and how well you can feel things. After that, they may want to try to feel your kidneys; this is often difficult, but in some cases when the kidneys are enlarged you can feel them and any changes in their size or shape.

There are lots of different tests that can be helpful in testing for chronic renal disease. Urinalysis (looking at your urine) can show blood, sugar, protein, white blood cells and other things that can give an idea of the cause of the renal problem. Some urine can also be sent off to the lab to see if any bacteria are growing in it. Sometimes people are asked to collect all their urine over a 24 hour period so that the total ‘creatinine clearance’ can be worked out to see how well the kidneys are filtering blood.

Blood tests (such as a full blood count) are also very helpful in a diagnosis of CKD. Blood tests need to be done to show how much creatinine remains in the blood, and there are also other tests that are useful to see if there are any complications. There are also some much more specialised blood tests that your doctor may wish to do.

Imaging studies (to get a picture of your kidneys) are also very helpful, with an ultrasound and a plain film x-ray giving an idea of size, consistency and the presence of any kidney stones that may be an underlying cause. A CT scan or MRI are also occasionally used.

Some other tests may be done such as a renal biopsy (where a small amount of the kidney is sent away to be analysed in a lab), or an intravenous pyelogram (where dye is injected and filtered through the kidneys, with images taken to show how well they are functioning) or renal angiography (which can show how healthy the blood vessels to the kidneys look).

CKD is most typically a progressive disease, the initial compensatory mechanisms give rise to further kidney damage and ultimately kidney function declines further. Conditions that cause rapid deterioration of renal function carry a poorer prognosis. People who smoke, have poor diabetes control, or are obese are likely to have their disease progress faster.

If detected early, and managed appropriately, the rate of deterioration may be reduced and in some cases, depending on cause, reversed. It is for this reason that early referral to a doctor who specialises in the kidney (nephrologist) is ideal.

You will be required to see your GP regularly for check ups and they may refer you to a kidney doctor depending on the condition of your disease.

The first step in treating chronic renal failure is to reverse anything that might be causing the problem such as dehydration, heart failure, sepsis, urinary tract obstruction, hypertension or toxic causes including some medications (NSAIDS, COX-2 inhibitors, radiographic contrast, aminoglycosides, lithium and calcineurin inhibitors). Unfortunately, this is not always possible as many of the causes cannot be reversed.

Having CKD dramatically increases your risk of having cardiovascular disease. Therefore it is also important to lower your risk factors for cardiac disease in order to have a better outcome. It is important to stop smoking as soon as possible, as doing that alone reduces the progression of the disease by 30%. Diabetes should also be kept under meticulous control, as keeping your blood sugars normal  also slows the progression of the disease. Keeping cholesterol low also helps minimise your risk of heart disease, and lowering it through the use of a statin (cholesterol lowering medication) also seems to help in ways other than just lowering cholesterol.

Beyond all of this, treating the complications of renal failure is also important. It is important to prevent malnutrition, treat hypocalcaemia (low calcium due to deficient vitamin D production) and manage anaemia.

People with CKD can suffer from anaemia (low numbers of red blood cells) for several reasons:

Anaemia is associated with poorer outcomes in CKD, and individuals may find that they feel tired, short of breath and have reduced exercise tolerance. If you become severely anaemic, iron infusions, blood transfusions or injections of recombinant erythropoietin (an artificially produced version of natural erythropoietin) may be considered by your nephrologist.

Eventually, however, for many people their kidney function deteriorates to the point where they can no longer function at an adequate level and an alternative filtering device is needed to perform the function of the kidney. This may involve dialysis or kidney transplant in some individuals. Dialysis can be performed in two ways:

In some cases a kidney transplant may be considered. This involves the surgical implantation of a donor kidney (kidney from another person) into the recipient (person with CKD). Kidney transplantation is a complicated process and requires specialist management.