What is jet lag? 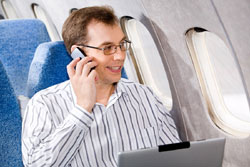 Jet lag, also known as circadian dysynchronism or flight dysrhythmia, is a temporary condition that arises as a result of rapid air travel across multiple time zones. It is characterised by symptoms such as disturbed sleep patterns, fatigue, insomnia and irritability, which develop because of the body’s inability to adapt to the new time zone.

Jet lag occurs when there is a disturbance in the synchronisation that exists between the body’s internal clock (circadian rhythm) and the external environmental rhythms.The internal body clock has a natural 24 hour routine that works in sync with environmental cues (also known as zeitgebers, or ‘time givers’) such as daylight to control the sleep-wake cycle. It also influences body temperature, blood pressure, bowel habits, and levels of hormones and glucose in the blood. When travelling across time zones, the natural rhythms of the body that are synchronised with the day-night cycles of the environment cannot adjust instantly. As a result, the brain may trigger activities that the body may not be prepared for, leading to the symptoms of jet lag.

Melatonin is a hormone produced by the pineal gland in the hypothalamus of the brain. Melatonin plays a key role in jet lag and in mediating body rhythms. The internal body clock is a localised group of cells, located in the hypothalamus, which have receptors to melatonin.Melatonin is released in response to darkness and promotes sleep. Daylight inhibits melatonin secretion, thereby encouraging daytime activity.

Not everyone experiences jet lag and individual experiences can vary widely. Additionally, the intensity of jet lag experienced varies with the number of time zones crossed and the direction of travel.Most people feel the effects of jet lag after crossing at least three time zones.

The direction of travel also influences the severity of jet lag experienced. Travellers flying east experience the most problems and require the longest time to adapt, compared to those flying west.It is easier for the body to readjust when travelling west because of the gain in time, rather than travelling east, when time is lost. Travelling eastward can result in difficulties falling asleep and rising in the morning, while westward travel is associated with early evening sleepiness and premature awakening. Flying north or south usually does not cause jet lag, as you are flying within the same time zone.

Who gets jet lag? 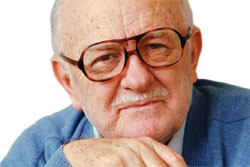 Almost anyone can experience some or all of the symptoms of jet lag. The intensity can vary from person to person. There are some people who experience minimal disruption to their natural patterns, whereas others take several days to readjust. Those aged over 50 are most vulnerable.

The symptoms of jet lag are worse when more time zones are crossed.There are some factors which can make jet lag worse, such as dehydration, lack of sleep, drinking alcohol and stress.

The symptoms of jet lag are temporary and may last several days. Readjustment usually takes about one day per time zone crossed.

Although jet lag is temporary, it can cause some long term consequences for frequent travellers (e.g. flight crew). Irregular menstrual cycles are frequently reported by women.

Jet lag can be disruptive for business travellers and holiday-makers. It can also affect performance and jeopardise training in athletes. A causal link has been made between jet lag and accidents. This is especially important for pilots, who may be prone to making errors as a result of reduced mental and physical performance. 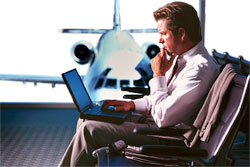 There is currently no available treatment for eliminating jet lag. However, there are some behavioural strategies that can be followed which may help to prevent and/or minimise the severity of jet lag:

Light is one of the most powerful and natural ways of resetting the internal body clock. Light exposure helps the body’s circadian rhythm adapt more quickly to the sleep-wake cycle at the new destination. Correctly timed exposure to white light can aid in advancing or delaying the body’s internal clock.

If you are travelling westward, it is best to stay awake during daylight at the destination and sleep when it gets dark. Following an eastward flight, avoid bright light in the morning and spend as much time as possible outdoors in the afternoon. The more time spent outdoors in the first few days following travel, the faster the adjustment to the new time zone. This helps to adjust the body clock and activate the body’s melatonin secretion at the correct time. Other activities that may help include eating small meals at the times that correspond to the usual mealtimes, and light exercise. Slowly increasing the intensity of light is believed to be more effective than pulses of light or continuous exposure to light of the same intensity. 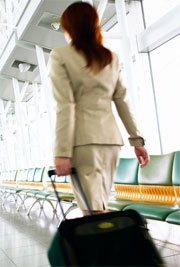 The effectiveness of melatonin supplements in alleviating the symptoms of jet lag is currently inconclusive. There have been studies that show it can help to reduce jet lag symptoms, however, there have been others that do not show any difference at all.

Oral melatonin advances the body clock and increases sleepiness if taken in the evening, and delays the body clock if given in the morning.It is suggested that melatonin (2-5 mg) should be taken at bedtime, beginning 3-4 days before departure and continued for 2-4 days after arrival.

Melatonin is generally considered to be well tolerated and safe. However, some adverse effects have been reported, such as sedation, confusion and decreased mental sharpness.People with epilepsy, or anyone on warfarin (e.g. Coumadin) or other anti-coagulants, should practice caution as its safety has not been confirmed. Young people and pregnant women are advised to avoid using melatonin.

Melatonin is currently available in the US, but not in Australia or Europe.There are some promising studies currently being undertaken to examine the effectiveness of melatonin analogues in the treatment of jet lag.

Caffeine is the only substance recommended for maintaining daytime alertness. Naps also have an important role, as they top up sleep and can help improve alertness and performance.

While there is no way to avoid jet lag, there are ways to overcome it faster by making sure you stay awake until 10pm local time on the day you arrive in order for your body to adjust. If you do need to sleep before, then make sure it is only a very quick nap, not longer than 2 hours.

To aid in promoting sleep, sedative hypnotics such as zolpidem (e.g. Stilnox) or zopiclone (e.g. Imovane) may be prescribed for the first few nights after arriving.These medications help increase the rate of recovery from jet lag and improve alertness the following day. They have been shown in some studies to promote longer periods of high quality sleep in those experiencing jet lag.

Short acting drugs such as temazepam (e.g. Temaze) are preferred to prevent oversedation the following day.

Prior to using sedatives, the potential benefits should be weighed against the adverse effects. Benzodiazepines such as temazepam are associated with reduced alertness and psychomotor performance. The combined use of sedative hypnotic medications and melatonin has been associated with nausea, vomiting, dizziness, headache, confusion and dry mouth. 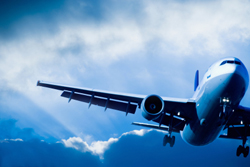 Another possible treatment strategy which may be beneficial is to follow the Argonne diet. The Argonne diet involves alternating days of feasting on high protein breakfasts and lunches and high carbohydrate dinners, with days of fasting with small low calorie meals.

The theory behind this is that high protein meals increase levels of epinephrine and dopamine in the body, promoting alertness, whereas high carbohydrate meals increase serotonin and melatonin, and prepare the body for sleep.Alternate day feeding apparently reduces the impact of the rapid time shift on the internal clock.

The diet begins with a feast on the fourth day before departure, and is followed by alternate days of fasting and feeding. During the three days before departure, caffeine containing drinks are allowed between 3pm and 5pm. On the departure day, feasting occurs and caffeine is permitted in the morning for westbound flights, or between 6pm and 11pm for eastbound flights. No alcohol should be consumed during the flight.