What is Renal Failure – Acute

Your kidneys are two very important organs in the body, which help perform many functions. Some of these functions include: helping you get rid of waste products, forming urine, controlling levels of important molecules such as sodium, potassium and chloride, and producing hormones that stimulate the production of red blood cells when the oxygen carrying capacity of the blood is not optimized.

Acute failure of the kidneys is a condition in which there is a rapid loss of the normal function of your kidneys, due to a sudden, acute or chronic insult. This means that they can not perform their normal functions, resulting in a range of complications. Some of these include: the build up of waste products that the kidneys usually excrete, such as urea and creatinine, high or low concentrations of molecules such as sodium and potassium, low numbers of red blood cells, inability to concentrate the urine properly and build up of excess fluid. Acute kidney failure should be treated as a serious condition and is a potential medical emergency.

Acute failure of the kidneys is not a rare condition, with the incidence depending on the definition used and the population studied. People who are hospitalized in hospital intensive care units (ICUs) are at very high risk for acute kidney failure. A large multinational study was recently published in 2005, which studied over 29000 ICU patients in multiple countries to try and determine the incidence of acute kidney failure. Patients were studied from September 2000 to December 2001 in 54 hospitals in 23 countries, including Australian medical centres and hospitals such as: Austin and Repatriation Medical Centre, Western Hospital, Sir Charles Gairdner Hospital, Frankston Hospital and Flinders Medical Centre. Of the 29 269 critically ill patients admitted during the study period, approximately 6% developed acute renal failure during their ICU stay.

The incidence of kidney disease due to bacteria such as streptococci has been gradually decreasing with the increasing living standards in Australia. However, in many Indigenous communities, high incidences of streptococcal infection and kidney disease are still seen. It is estimated that the Indigenous population have a ten times greater risk of eventually developing renal failure after they have had bacterial infections, than compared to the non-Indigenous population.

Generally, causes of acute kidney failure can be divided into three groups – pre-renal (ie affecting the body’s volume and vessels supplying the kidneys, renal (within the kidney) and post renal (affecting pathways and structures after the kidneys).

Examples of these groups of causes include:

Pre-renal (often due to decreases in the blood supply):

Renal (damage to the kidney itself):

Post-renal (obstruction in other parts of the urinary tract) such as: 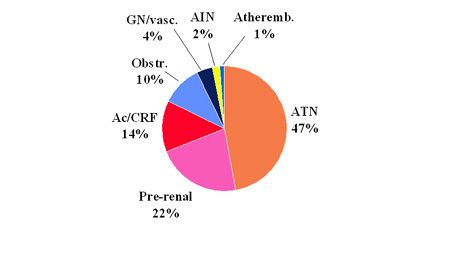 The prognosis of patients with kidney failure depend primarily upon the underlying cause and presence or absence of other medical conditions. With progression of time, the mortality has decreased, due to better understanding of the causes and optimal treatment. In cases where the cause is pre-renal or post renal, the kidneys often show a good recovery once the precipitating factor is removed.

There is a higher mortality rate that is seen especially in surgical and trauma patients. In patients who are in intensive care units, there is an estimated mortality rate of 50% or more. This is often due to the underlying disease and other existing medical conditions rather than to complications of kidney failure alone.

If you have established kidney failure, complications due to accumulation of waste products and fluids may occur in the next few days. After two – four days, high levels of calcium, phosphate and potassium may develop. Five to seven days later, you may experience symptoms from excessive build up of urea including – drowsiness, hiccups, nausea, easy bruising, bleeding and itching. End stage complications (which should be prevented from occurring) include: abnormalities of the heart rhythm, build up of fluid in the lungs and bleeding into the space around the heart and the gut.

Your medical practitioner may ask certain questions to help determine the cause of your kidney failure and help guide optimal management of your kidneys. The cause of renal failure can often be determined by obtaining a good history. One of the most important questions to answer is whether you are still producing urine. If you are not still producing urine, this is a medical emergency and requires more aggressive management.

Further questioning can be directed towards identifying the specific cause of your kidney failure:

When the doctor examines you, he or she may concentrate on the following areas:

Fluid Balance of The Body
To accurately assess how much fluid is in the body, your urine output, blood pressure (lying and standing) and pulsations of veins in your neck may be used. If you are producing minimal amounts of urine, have low blood pressure, an increased heart rate and dry skin and mucous membranes, this suggests a state of volume depletion / insufficiency. Signs of too much water retention in the body often do not manifest until you have gained more than 2 kg in water.

Your heart and lungs may also be examined – any signs of heart failure or severe hypertension (high blood pressure) can contribute to worsening of the kidney’s function.

Causes of post renal failure may also manifest clinically. You may have an enlarged bladder which can be felt on examination, or a mass in the abdomen that is discovered. Pain on the left or right sides of the lower abdomen may suggest a kidney stone, infection or obstruction.

How is Renal Failure – Acute Diagnosed?

There are various tests that can be used to help the doctor diagnose a problem with
your kidneys and assess the degree of kidney failure present. These include:

How is Renal Failure – Acute Treated?

Management can be broken down into three major areas:

Kidney doctors: what does a nephrologist do?