What is Pulmonary Hypertension

Primary pulmonary hypertension (ie. no obvious cause) is a rare disease. It is found in 0.1-0.2% of all patients at autopsy, but many are asymptomatic until late in the process.

Secondary pulmonary hypertension, however, is much more common that that – since it frequently complicates almost any form of chronic lung disease.

Many diseases may cause pulmonary hypertension. These include:

When none of these causes are present, “primary pulmonary hypertension” is diagnosed. It is a diagnosis of exclusion.

Endothelial damage causes a range of local effects, mediated by the release of enzymes and chemicals from these cells. These changes result in constriction of pulmonary blood vessels. In some cases, spasm of muscle layers inside blood vessels is also a factor; this means that treatment with vasodilator medication may be useful.

In the early stages of disease, these changes may only occur during exacerbations of underlying lung disease, for example, acute exacerbation of COPD. Eventually, however, pulmonary hypertension becomes severe and persistant. The strain on the right ventricle of the heart causes its function to decline, leading to right heart failure.

Lack of oxygen, caused by underlying lung disease, and abnormal blood flow through the lungs, further impairs the function of the right ventricle, and eventually leads to left ventricular failure, as well.

How is Pulmonary Hypertension Diagnosed? 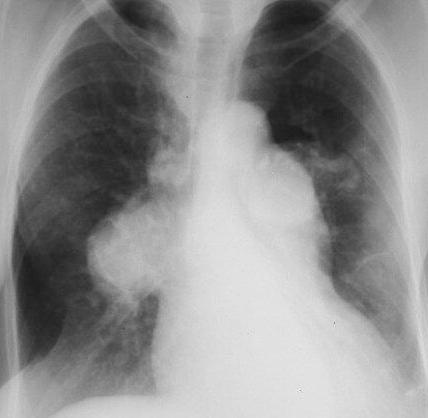 The onset of pulmonary hypertension on the background of any other disease has a poor prognosis, because it is usually progressive, and eventually leads to right heart failure (cor pulmonale). Only 1/5 of patients on average are alive within 2-5 years of onset.

How is Pulmonary Hypertension Treated?

Heart and lung transplantation is sometimes recommended for young patients with primary, or secondary hypertension due to disease such as cystic fibrosis. Recent progress in medical therapies has diminished the role of transplantation in the management of PPH during the past decade. Drug therapy is not effective in some patients, responses to therapy are not sustained over time in others, and drug side effects eventually limit the benefits of treatment in a few more.

Lung transplantation is therefore ultimately the only alternative for patients whose PPH is severe and cannot be managed medically. The outcome of lung and heart-lung transplantation for PHH has been good but sobering. Functional recovery has been excellent, but long-term survival results have been limited by the high prevalence of chronic allograft rejection.