What is Mitral Stenosis (MS)

Mitral stenosis is a narrowing or obstruction of the opening of the mitral valve, which separates the upper (left arium) and lower chamber (left ventricle) on the left side of the heart. This prevents adequate blood flow between the left atrium (upper chamber) and ventricle (lower chamber).

The main predisposing factor is rheumatic fever– a childhood illness which is thought to be an autoimmune reaction to a streptococcal infection.

Over the past 80 years the incidence of rheumatic fever has decreased from 10% to 0.01%, probably due to improved antibiotic control of streptococcal infections. It is still a significant disease in the Middle and Far East, Eastern Europe, South America and among indigenous Aboriginal populations of Australia. Some recent epidemiological evidence suggests a possible resurgence of the disease.

Rarely, congenital mitral stenosis can occur. In addition, occasionally a similar clinical syndrome can result in the elderly due to fibrosis of the valve.

Rheumatic Fever as a child is followed by many decades of silent changes to the valve. When the valve orifice area is reduced to 2cm2 symptoms usually start to develop. To maintain the cardiac output, the left atrium becomes hypertrophied and a little dilated. This causes pulmonary (lung) pressures to increase which causes pulmonary oedema (fluid on the lung) and predisposes to infections (bronchitis) and eventually right heart failure ensues with peripheral oedema – swelling of the ankles and abdomen. Atrial fibrillation and valve infection (infective endocarditis) can also complicate it.

How is Mitral Stenosis (MS) Diagnosed?

Mitral stenosis usually follows a slowly progressive course with bronchial infections, worsening dyspnoea and the signs and symptoms of atrial fibrillation. Without treatment, the end result of mitral stenosis is cardiac failure which has a very poor prognosis. However, mitral stenosis can be treated by surgical means, including valve replacement when it seems to be progressing.

How is Mitral Stenosis (MS) Treated? 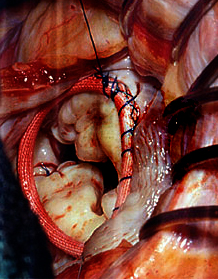 Treatment initially may be mainly symptomatic (based upon symptoms). This involves treating complications of bronchitis and treating any atrial fibrillation.

Antibiotic prophylaxis may be indicated in patients with MS to prevent infective endocarditis.

If there is evidence of pulmonary hypertension, surgical correction of the problem may be indicated. Options include valvotomies (in which the cusps of the valve are forced apart either by a balloon or other dilators) and mitral valve replacement using a synthetic valve. Anticoagulation and prophylactic antibiotics may be indicated as prosthetic valves are more susceptible to clot formation and infection.