Meningioma of the spinal cord

What is Meningioma of the Spinal Cord 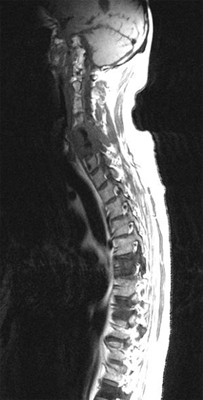 Meningioma of the Spinal Cord is a type of spinal cord cancer.

The spinal cord forms part of the central nervous system. It is a cylindrical continuation of the brainstem, commencing from the medulla (at the level of the foramen magnum at the base of the skull) and extending to the conus medullaris at the level of the L2 vertebra. It is located within the vertebral canal – the bony tube formed by the vertebral foramina. Below the level of L2 the remaining contents of the spinal canal are known as the cauda equina – the bundle of nerve rootlets in the subarachnoid space. Within the vertebral canal run the spinal cord, the spinal meninges, the cerebrospinal fluid, associated vessels and loose connective and fatty tissue. The spinal meninges – the dura, arachnoid and pia mater – are membranes surrounding and supporting the spinal cord.

Arising from the spinal cord are 31 pairs of spinal nerves that are the neural connections between the peripheries and the central nervous system. They attach to the spinal cord through ventral and dorsal roots and have both afferent and efferent properties. That is, the spinal cord acts as the main pathway for communication between the brain and the rest of the body.

Extradural tumours most commonly represent metastases and usually arise within the vertebral bodies. These tumours most commonly cause spinal compression through extrinsic mass effect but can on occasion do so through intradural invasion. Symptoms from these tumours tend to be the slowly progressing features of spinal cord compression with initial predominantly motor loss followed by progressive sphincter dysfunction and ascending sensory loss. Extradural tumours represent the vast majority of spinal cord tumours.

Intradural extramedullary tumours tend to be nerve sheath tumours (neurofibromas) or meningiomas. They commonly present with nerve root involvement consisting of pain and progressive dysfunction due to spinal cord compression from the expanding tumour mass.

Intramedullary tumours usually represent gliomas – ependymomas or astrocytomas – but metastatic deposits within the spinal cord itself are increasingly recognised. These tumours result in a diffuse swelling of the spinal cord, often over several segments, characterised by loss of local function, pain and eventual loss of spinal cord function below the level of the lesion. A cyst may form in the spinal medulla, giving rise to a clinical picture of syringomyelia (predominant loss of spinothalamic function – pain and temperature sensation – and blunted reflexes at the level of the lesion). Sacral sparing is a very late feature of intramedullary tumours but is pathognomonic.

Statistics on Meningioma of the Spinal Cord

It is rare with less than 1.5 per 100,000 primary spinal cord tumours and of these only approximately 1/4 are meningiomas. More than 90% of meningiomas arise within the cranial fossa and occurs with highest incidence in patients aged 40 to 70 years with sex incidence being 3:1 female to males, except when the tumour occurs in children where the sex incidence is approximately equal. Meningiomas tend to increase in size during pregnancy.

Geographically, the tumour is found worldwide.

Risk Factors for Meningioma of the Spinal Cord

The only proven risk factor in the development of meningioma is exposure to ionising radiation – with tumours commonly developing following a 10 to 20 year lag time from exposure. Patients with neurofibromatosis type 2 (genetic defect on chromosome 22) are at increased risk of developing meningioma.

Progression of Meningioma of the Spinal Cord

This type of tumour spreads by local invasion and erosion of surrounding bony structures through pressure effects. Meningiomas are very rarely malignant but occasionally tumours may show a tendency to recur.

How is Meningioma of the Spinal Cord Diagnosed?

Prognosis of Meningioma of the Spinal Cord

Benign meningiomas are associated with a very good survival prognosis with approximately 100% 5 year survival. Morbidity relates to the location of the tumour and the degree of neurological dysfunction at diagnosis. Malignant meningiomas have a poor prognosis with median survival of between one and three years even with treatment.

How is Meningioma of the Spinal Cord Treated?

Initial treatment of patients with suspected spinal cord compression is with corticosteroids.

Surgical resection is the mainstay of treatment in meningiomas of the spinal cord and the degree to which a tumour can be resected has great bearing on prognosis. Unfortunately, the recovery of previously lost neurological function post-operatively is unlikely.

Where complete resection is not possible, post-operative radiotherapy is limited to the area of the tumour and the margin of potential spread is advocated in preference to more radical surgical approaches which are associated with significant increases in post-operative morbidity without any clear survival benefit. Tumour recurrence is usually treated with further surgery.

Improvement in symptoms is an important measurement. Specific monitoring may be done by serial neurological examination and imaging of the spinal cord.

The symptoms that may require attention are those resulting from the neurological deficits associated with the tumour, and the neurogenic pain from compressed nerve tissue. Patients with significant neurological deficits are best managed by a specialised neurological team, using a multidisciplinary approach including physiotherapy, occupational therapy, nursing and medical practitioners.

Meningioma of the Spinal Cord References