Introduction to the innate immune system 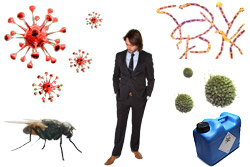 The body is sometimes described as constantly being ‘at war’. Everywhere around us there are dangerous bacteria, viruses, parasites and toxins that can cause the human body harm. To combat this, the body uses the immune system to fight away anything that may cause damage. The innate immune system are those parts of the immune system that work no matter what the damage is caused by, and are all aimed at protecting the body without the need for a lot of preparation. They are always at work and do not need to have seen the offending invader before to be able to start attacking it.

The major defences of the innate immune system are those that stop the infection from getting into the body in the first place. If they can do this, then it makes killing the few that get through a much easier task for the body.

Skin
The skin is a thick barrier to infection and protects from bad bacteria in a few ways.

If the skin is constantly damp, such as the skin between toes, under arms or even under rolls of fat, it weakens the barrier. This wet skin can be more easily broken by the fungus that usually live on the skin and allows them to grow, causing a fungal infection. If the skin is broken by a cut or graze then it allows a far more easy access to the body than otherwise and these areas can get infected more easily. During surgery, even though every attempt to stop infection is made, sometimes the body’s own normal bacteria can cause an infection because of the cut.

Lungs
The lining of the airways of the respiratory system are also coated in a thick, mucous-like substance that acts as a protective barrier. These airways are basically like big pipes, with lots of air flowing through all the time. With this air comes many possibly damaging things so the lungs must be protected. In the lungs, as air rushes past the walls, bacteria adhere to sticky mucus. In this mucus is an enzyme, which is the name for a substance that causes a chemical reaction. Here, the enzyme, which is called lysozyme, causes the bacteria to be broken down into its basic parts. It is being treated much like a food, and is being digested by this enzyme. After it has been digested, the remains of the dead bacteria as well as other substances are swept out of the air ways by small hair-like projections called ‘cilia’ which line the walls.

Eyes
Tears act to stop infection in two ways. Firstly, the tears physically wash away a lot of bacteria. Secondly, tears also contain the same enzyme that was mentioned before, lysozyme, which protects the eye from bacteria.

Mouth
The mouth is full of highly dangerous bacteria that can easily destroy tissue and cause tooth decay. Saliva helps prevent the destructive processes in several ways:

Stomach
The stomach is a highly acidic environment, which is very destructive to most types of bacteria. Also, if a bacteria or other dangerous substance gets into the stomach, then they are treated just like any type of food and often broken down and destroyed by digestive enzymes before they can cause any damage.

Urinary tract
The urine is slightly acidic, meaning bacteria do not grow very well. The frequent flushing action of urination also helps to lower the amount of urinary infections.

Vagina
In a similar way to the skin, mucous linings of the vagina help form physical barriers to the entry of infective organisms. Also like the skin, the vagina is home to a lot of native bacteria that compete with the dangerous types and stop them from growing. Also in the vagina, there is a population of a type of bacteria called Lactobacillus that produces an acidic substance called lactate, helping to keep the environment slightly acidic and slowing bacterial growth.

Innate immune responses in the blood

If infective agents manage to get through the boundaries described above and enter the body, there are several other immune responses that take place. One defensive process involves the white blood cells (also called leukocytes). Types of white blood cells are the neutrophils, eosinophils and basophils can respond to foreign substances that have never been seen by the immune system before. Another immune defence involves the presence within the blood of specific chemical compounds that attach to foreign organisms and destroy them including:

Natural killer cells
Natural killer (NK) cells arise from the bone marrow. Bone marrow is in the centre of some types of bone, and is the manufacturing area for lots of blood cells. Unlike other cells, NK cells attack the body’s own cells that have been infected by microbes, rather than the microbes themselves. They scout the body for anything that appears to be wrong with the body’s own cells such as happens in tumours and viruses. NK cells, when the detect a problem, use some specialised enzymes to punch holes in these cells and inject a chemical that causes the cell to die in a special type of cell death called apoptosis. Apoptosis involves the cell being dismantled rather than just exploding which keeps the virus contained.

When any type of tissue injury occurs, substances are released from the body tissues causing inflammation. The signs of inflammation are redness, warmth, swelling and pain. These signs are caused by:

The substances that cause inflammation are mostly those released from cells called mast cells, which are located mostly in connective tissues. These synthesise and release chemicals called histamine, bradykinin and some others which cause the effects described above. This helps to repel invaders because it absolutely saturates the area with all the substances that have been described above. Complement comes out of the leaky vessels, as do the phagocytes giving them the most possible access to the damaged area.

Fever is a body temperature above the range of normal. Temperature is usually controlled by part of the brain called the hypothalamus. Fever can be caused by direct stimulation of the hypothalamus by the break-down products of infectious agents like bacteria or viruses. It can also be caused by the release of a certain body chemical that is released by the phagocytes when the sense that they have just digested one of these infectious agents. This substance, called Interleukin-1, can cause a fever almost immediately.
A fever is not a dangerous thing in most circumstances. It is actually the body trying to help out in the fight against infection by raising the temperature to a level that the bacteria do not grow as well in. The level at which a temperature becomes ‘dangerous’ is hard to define. It usually comes along with sensations like chills. This is because the body is doing everything it can to raise the body’s temperature and so is urging you to rug up and is using muscles to build up heat resulting in shivering. Usually it goes a little too far however, resulting in the feeling of sweating and being very hot.
If the symptoms of fever are too uncomfortable, ‘anti-pyretics’ such as aspirin or paracetamol can be taken. While these lower the temperature, and so can cause the disease to last a little bit longer, often people find the relief of the fever symptoms is worth the trade-off.