Introduction to the Female Urogenital System

The female urogenital tract consists of all the organs involved in reproduction and the formation and release of urine. It includes the kidneys, ureters, bladder, urethra, and the organs of reproduction – uterus, ovaries, fallopian tubes and vagina.
The kidneys are bean shaped organs, which help the body produce urine to get rid of unwanted waste substances. When urine is formed, tubes called ureters transport it to the urinary bladder, where it is stored and excreted via the urethra.
The uterus or womb is the major female reproductive organ, which supports and nourishes the developing baby. One end of the uterus called the cervix, opens into the vagina, whereas the other is connected on both sides to the fallopian tubes. These tubes connect with the ovaries, which are important in producing eggs and secreting hormones. 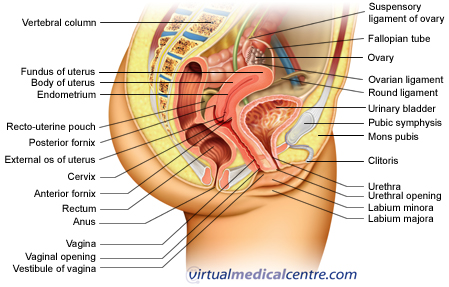 The kidneys are large, bean shaped organs which lie in the back part of our abdomen (bellies). They lie behind a protective sheet of tissue within the abdomen. The kidneys perform many vital functions which are important in everyday life. For example, they help us get rid of waste products by making urine and excreting it from the body.
A special system of tubes within the kidneys allows things like sodium (salt) and chloride to be filtered. They regulate the amount of water in the body. Humans produce about 1.5 litres of urine a day. However if we drink more water, we may produce more urine. On hot days, if we get dehydrated and sweat more, there may be a decreased amount of urine. This is why it’s very important to drink lots of water on hot summer days. The kidneys also produce renin, a hormone important in regulating our blood pressure and erythropoietin, which helps us produce red blood cells to form our blood.
Located in the lower part of our bellies, the right kidney is slightly lower in position than the left to allow for our liver. The kidneys are reddish brown in colour and measure about 10cm in length, 5cm wide and 2.5cm thick. Our kidneys are “bean-shaped” organs, on the side with the smaller curve, there is an opening, called the hilum. This is where blood vessels like the renal artery, the renal vein, nerves, and the ureters enter the kidney. On one end of the ureters, there is a funnel shaped expansion called the renal pelvis. This is where urine collects. The ureters are tubes that are 25-30cm long and lined with smooth muscle. These tubes help carry urine to the bladder. The muscular tissue helps force urine downwards. They enter the bladder at an angle, so urine doesn’t flow up the wrong way.
The kidney can be divided into two distinct regions. There is an outer red brown part (cortex) and inner lighter coloured part (medulla).
The cortex is made up of special units called corpuscles, nephrons and a system of straight and curvy collecting tubules, which are supplied by many blood vessels. In the outer part of the kidney, there are many nephrons which act as filtering units. Each of these nephrons are supplied by a ball of small blood vessels, called the glomerulus. They also have a network of tubules. Blood is filtered through the small blood vessels to produce a mixture that is the precursor of our urine. This mixture then passes through more tubules where water, salt and nutrients are re-absorbed.
The inner part of the kidney – the medulla, is a continuation of the specialized nephrons in the kidney. There is a small blood vessel network called the vasa recta which supplies this inner area. Each kidney is supplied by bilateral blood vessels called the renal arteries, which give off many smaller branches to the surrounding parts of the kidneys. Renal veins drain the kidney.

The bladder is a pyramidal shaped organ, which sits in our pelvis (the bony structure which helps form our hips).
The main function of the bladder is to store urine, and under the appropriate signals, release it into a tube which carries the urine out of the body. Normally, the bladder can hold up to 500mls of urine. It is made up of a triangle shaped base, in which there are three openings: two for the ureters (tubes from the kidneys) and one for the urethra (tube carrying urine out of the body).
The bladder consists of smooth muscles and the main muscle of the bladder is called the detrusor muscle. Muscle fibres around the opening of the urethra forms a ring-like muscle, which controls the passage of urine. When we want to urinate, stretch receptors in the bladder are activated, which send signals to our brain and tell us that the bladder is full. When we begin to urinate, the ring-like muscle relaxes and the detrusor muscle contracts, allowing urine to flow.
Blood supply of the bladder is from many blood vessels (called arteries and veins). Some of these blood vessels are named: the vesical arteries, the obturator, uterine, gluteal and vaginal arteries. In females, a venous network drains blood from the bladder arteries into the internal iliac vein. Nervous control of the bladder involves centres located in the brain and spinal cord.

About 4-6cm long and 6mm wide, the urethra is a tube which runs from the bladder neck to open into an external hole which is located at the top of the vaginal opening. As the female urethra is shorter than the male urethra, it is more likely to get infections from organisms from the vagina, such as bacteria.
The urethra is supplied by blood vessels called the internal pudendal and vaginal arteries, with the veins following these blood vessels. The nerve supply is via the pudendal nerve.

The uterus is the part of the female reproductive tract that supports the developing baby. It is a hollow, pear shaped organ located in the pelvis between the bladder and rectum. The uterus is capable of undergoing great changes in size and development during pregnancy. In a female who has never had any children, the uterus weighs 30-40 g, measures 7.5cm wide and 2.5cm thick. It is continuous with the fallopian tubes and the vagina.

The uterus is divided into:

The wall of the uterus is made of three layers:

The muscular layer is important in providing the uterus with it’s strength and for initiating strong contractions during the birth of a baby. The endometrium lining builds up with blood vessels and tissues, to accept a fertilized egg each month. If pregnancy does not occur, this lining breaks down and is shed through a process known as menstruation (period).
The blood supply of the uterus is from the uterine and ovarian arteries. The uterine veins follow the arteries and form a network on each side of the cervix. The nerves to the uterus come from the uterovaginal network.

Normally females have two ovaries, which function mainly to produce eggs and secrete hormones (including oestrogen and progesterone). These hormones released help regulate maturation of eggs and help in producing bodily changes during puberty. The ovaries are attached to special ligaments (sheets of tough tissue), and to the uterus.
As females develop within the womb, each ovary has a number of immature (young) eggs. Through puberty, the eggs mature and are released from the ovaries during ovulation. Blood supply of the ovary is from blood vessels called the ovarian arteries.

The vagina is a muscular tube 6-7.5cm long, which leads from the uterus to the outside of the body. The vaginal wall consists of an inner tissue layer, intermediate muscle layer and outer tissue layer. The wetness and moisture of the vaginal surface is achieved by mucous from the cervix. The outer layer is made of elastic fibres, blood vessels, lymph vessels and nerves. The elastic fibres give the vaginal wall it’s strength and elasticity.
The functions of the vagina are: copulation (admitting the penis during sexual intercourse), allowing menstrual blood to leave the body, and giving birth.