What are muscle cramps?

Muscle cramps are painful, sometimes disabling, involuntary contractions of a muscle normally under voluntary control (skeletal muscle). They are caused by abnormal functioning of the motor nerves which control muscles. Cramps are exacerbated when the nervous system is stressed.

Muscle cramps can also be associated with intense exercise. An exercise-associated muscle cramp (EAMC) is a painful, involuntary contraction of skeletal muscle which occurs immediately after or during exercise.

EAMCs are commonly experienced by athletes and are one of the most common conditions that require medical attention during or after sporting events. The incidence of EAMCs increases with higher frequency, intensity and duration of the exercise, and are especially prevalent in endurance athletes such as marathon runners. 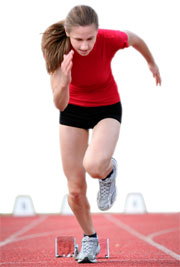 EAMCs are particularly common in endurance events such as:

EAMCs are also common in many sports, including:

EAMCs are seen more commonly in competitive environments were the racing pace is faster than the training pace. Exercising in hot and humid environments is also known to increase the risk of experiencing EAMCs.

The cause of EAMCs is not entirely understood, but it is believed to be due to:

Muscle cramping as a result of muscle fatigue is thought to be due to the nervous system having a loss of control over the muscles (neuromuscular control) due to the excessive physical stress placed on muscles during sporting events.

Muscle cramping due to dehydration is mainly achieved through sweating. The more people sweat, the more sodium (salt) they will lose. Sodium is an electrolyte that is important for hydration. The degree of electrolyte loss will depend on the sweating rate, concentration of sodium in sweat, and the dietary intake of the athlete. Regardless of individual differences, after exercising continuously for around 3–4 hours, the sodium concentration in sweat will generally be high in most people.

There is quite a bit of overlap between cramps that occur due to muscle fatigue and cramps due to dehydration; it follows that if an individual is losing excessive sweat due to exercise, they are more than likely fatiguing their muscles. There are, however, distinguishing features between the two. 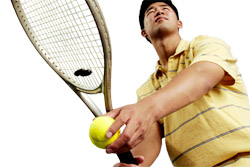 EAMCs can be painful and distressing, but do not disturb normal vital signs such as heart rate or blood pressure. They develop over a few minutes during exercise in active muscles, and remain localised to that muscle or group of muscles. Most commonly, the muscles that will be affected are leg muscles, including the calf, hamstring or quadriceps. Muscles that span two joints are the most susceptible to cramping.

If the exercise is continued once a cramp has developed, it will commonly be followed by muscle twitching and spasmodic spontaneous contractions of the muscle. These muscle twitches or fasciculation will be visible in the affected muscle.

People who have poor stretching habits, a history of cramping, have undergone extreme exercise, or are of older age are at risk for developing EAMCs.

EAMCs that are due to muscle overload and fatigue are likely to display the following characteristics:

EAMCs that are due to electrolyte depletion and dehydration are likely to display the following characteristics:

If you experience recurrent episodes of EAMCs you may have an underlying medical condition. In this case, a full medical history and examination will be performed.

If your doctor suspects that the muscle cramp is not an EAMC, they will refer you to a specialist or, in severe cases, you will be taken to the emergency department.

How to prevent exercise-associated muscle cramps 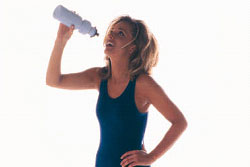 Your doctor will guide you towards the most suitable method of prevention for your EAMCs.

Athletes who are prone to cramping as a result of dehydration and electrolyte depletion will develop a sodium deficit if their sweat losses after exercise are not immediately subsidised by diet. At the first sign of muscle twitching, your doctor may suggest a generous intake (half a litre) of a high-salt solution drink to prevent the cramp from developing. Salt tablets can also be an effective preventative strategy if they are consumed with plenty of water.

For those who tend to experience cramps due to muscle fatigue, preventive measures can include:

How to treat exercise-associated muscle cramps

Without completely understanding what causes EAMCs, treatment options are limited, but there are some immediate actions that can be taken to reduce the severity of the cramp and relieve the pain. The first step in treating any EAMC is to stop the exercise that is causing the cramping.

If the cramp is due to muscle overload and fatigue, treatment options for the affected muscle may include:

For any athlete, it is important to replace the water and electrolytes that were lost during the exercise. Ingesting salt will help ingested fluids be sufficiently restored and retained.

Serious allergic reaction? 11 ways of knowing if you’re having one

Recognizing the first signs of a serious allergic…