Allergies are the immune system’s incorrect response to allergens (foreign substances). Exposure to what is normally a harmless substance, for example pollen, causes the human immune system to react as if the substance is harmful. When people come into contact with an allergen, they may experience a number of allergic symptoms including itchy, watery nose and eyes (allergic rhinitis and allergic conjunctivitis); asthma symptoms such as wheezing and coughing; allergic eczema or hives (urticaria); and allergic shock (also called anaphylaxis or anaphylactic shock). 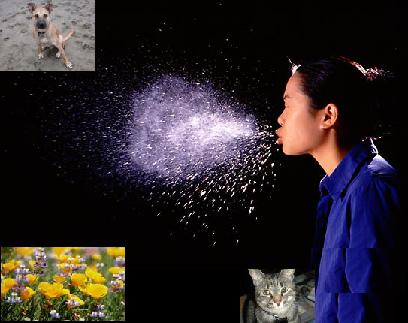 Why do some people experience allergies?

A hypersensitive response, or ‘allergic reaction’ is the result of how three factors interact with the body:

The IgE antibodies cause the mast cells to release inflammatory chemicals that cause swelling of tissues, as well as histamine and several other chemicals that cause itching, engorgement of blood vessels, increased secretions and bronchospasm (tightening of muscles that surround the airways). Some of these chemicals attract white blood cells known as eosinophils. The eosinophils add more inflammatory chemicals. If the allergen is in the air, the allergic reaction will occur in the eyes, nose and lungs. If the allergen is ingested, the allergic reaction will occur in the mouth, stomach and intestines. Sometimes enough inflammatory chemicals are released to cause a reaction throughout the body, such as a severe rash, decreased blood pressure, shock or loss of consciousness. This severe type of reaction is called anaphylaxis and may be life-threatening.

Allergy symptoms can be categorized as mild, moderate or severe (anaphylactic). Mild reactions include local symptoms (affecting a specific area of the body) such as a rash or hives; itchy, watery eyes; and some congestion. Mild reactions do not spread to other parts of the body. Moderate reactions include symptoms that spread to other parts of the body. Symptoms may include itchiness that spreads or difficulty breathing. A severe allergic reaction, known as anaphylaxis, is a rare, life-threatening emergency in which the bodys response to the allergen is sudden and affects the whole body (systemic).

Common allergens that provoke allergic reactions in people include:

If you think you have allergies, don’t wait to see if your symptoms will go away. When your symptoms last longer than a week or two and tend to recur, make an appointment with your doctor so a complete medical evaluation can be performed.
Tests that may reveal the specific allergens include:

The goal is to reduce the symptoms caused by inflammation of the affected tissues.