Surgical Treatment of a Skin Cancer or Other Lesion

Introduction to surgical removal of a skin lesion

Removing a skin lesion (a lump, bump or discolouration), such as a skin cancer, is one of the most common clinical procedures that can be done in a GP clinic. The removal of a lesion is often the first and best treatment for many conditions, especially skin cancers, because if done correctly it not only completely gets rid of the problem but can also stop it from regrowing.

There are several advantages to surgically removing a skin cancer, including:

While surgical removal is generally quite safe, there are a few possible negative outcomes associated with it, including:

What happens before the procedure?

Before a lesion such as a skin cancer is removed, the doctor will first have to be certain that it is worth removing. While for the skin cancers (basal cell carcinomas, squamous cell carcinomas and melanomas) it is always best to have them removed, there are some conditions that can actually look very similar but are quite harmless. 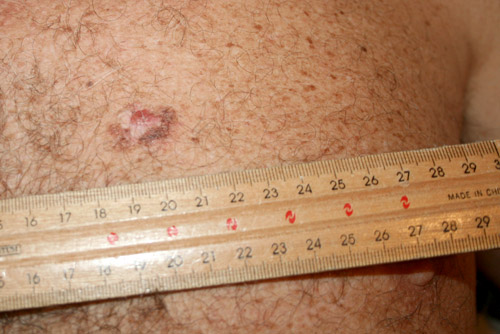 If a doctor is not certain, and would like to be sure of what they are dealing with before conducting any further surgery (as this may lead to some complications such as scarring) then they may first do a skin biopsy. A skin biopsy is a small sample of tissue that can be sent to the lab, examined under a microscope and from this they can tell what type skin lesion it is. There are several different types, such as a punch biopsy and a shave biopsy.

A lot of the time however, removing the lesion is often the first step as there is little harm in doing so. Also before removing a skin cancer, the doctor may chart it and other lesions on the body, either using a computer or on paper. This is useful both in the diagnosis and treatment of the lesion that is about to be removed, as well as in the future treatment of other skin cancers. Some doctors can take photographs of the cancers noting where on the body they lie, and while this can be helpful, it is not necessary for the treatment of skin cancers and can be very time consuming and expensive.

What happens during the procedure?

After the lesion has been closely examined, the area will be cleaned with some very strong anti-bacterial agents to lower the likelihood of infection. After this, the area will be surrounded by a surgical drape to highlight the area and give the doctor a sterile (germ-free) zone to work in.

Next, the doctor will sometimes draw an outline, along which they plan to cut with a scalpel to remove the lesion. The usual shape looks like a cat’s eye. 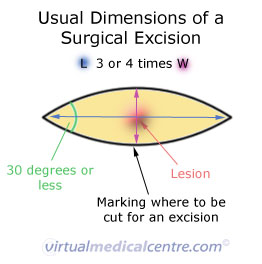 This shape is the best because it allows for better healing and makes stitching it up afterwards far easier. The size of the area can vary, but usually it is about three or four times as long as it is wide.

The alignment of this cut is important; the doctor wants there to be as little stress on the wound as possible to decrease the chances of it being painful or even breaking apart. To do this, it is lined up along where the skin is under the least tension. The doctor can tell this by looking at the folds and creases in the skin.

After the area is marked out, anaesthetic will be injected just below the skin. The doctor may use a pure anaesthetic to numb the sensation, or a combination of anaesthetic and adrenaline. Adrenaline is a chemical found naturally in the body, and in this case it acts to make some of the blood vessels smaller and lower the amount of blood loss.

When the skin is numb, it will be cut with a very sharp scalpel. At the corners, where the two cut edges meet, the skin can be picked up a little bit and the scalpel is used to lift off the lesion from the underlying layers. This sample will then be completely separate from the rest of the skin, placed in a specimen jar to be sent to the lab.

After that, the doctor will stitch up the wound. Usually they will use a technique called ‘interrupted sutures’ where there are several separate stitches, each holding the skin closed a bit each until all the skin edges are touching each other. This allows the body to heal the skin very effectively – hopefully without scarring.

What happens after the procedure?

After the wound has been stitched up, it will be covered in a dressing that will soak up any blood. Usually, the wound will be covered in something that allows you to shower and remains stuck to the skin even when wet so you do not have to keep it completely dry. You should discuss this with your doctor, however. 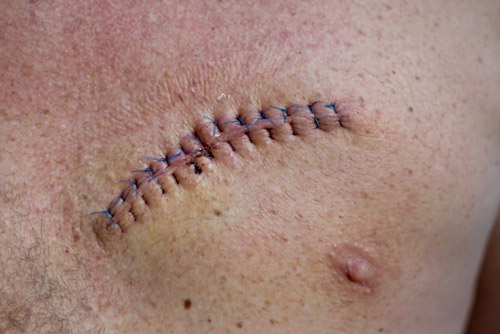 If the cut has been made in an area of low tension then usually there is little pain as the skin is not being pulled. If there is some pain, then some mild pain relief such as paracetamol can be used. In some cases, the doctor may wish to inspect the wound within a few days to make sure it is healing nicely and possibly replace the dressing. If you notice that the area is becoming increasingly red, sore, or has not stopped bleeding then you should contact your doctor for them to reassess the wound.

How long it takes before the stitches can be removed will depend on where they are. If they are in an area of high tension such as the back, then it may take up to two weeks before they can be safely removed. In more delicate areas such as the hands, however, they may be removed in as little as 5 days. Sometimes only half the stitches may be removed at once, allowing for some increased comfort and decreasing the chance of infection while still giving the skin enough support to hold the wound together.