Caffeine is a naturally occurring substance which stimulates the central nervous system. In doing so, it may temporarily increase alertness and relieve fatigue. While it is not nutritionally required by humans, most adults can safely consume moderate amounts of caffeine. Breastfeeding women can also safely consume caffeine, but they should consume less caffeine than non-breastfeeding women, to protect their health and the health of their breastfed baby.

Many women feel excessively tired and stressed in the breastfeeding period, as at this time they are also adapting to the lifestyle changes associated with having a newborn baby. Some women may use caffeine to increase alertness and relieve fatigue, without considering that caffeine is a drug which may adversely affect their baby’s health. It is important to remember that caffeine is transferred to a baby through the mother’s breastmilk, and excessive consumption by the mother may have adverse health effects for the baby.

Evidence suggests that babies breastfed by women who consume large quantities of caffeine (> 750 mg per day or 6–8 cups of coffee) are exposed to 0.6–0.8 mg of caffeine in breastmilk per day. While this is only a fraction of the caffeine to which the mother is exposed, babies, particularly in the first month of life, metabolise caffeine much more slowly than adults.

The time a baby takes to metabolise caffeine does reduce as they age. While caffeine has a half-life of 97.5 hours in neonates, the half life in newborns (4 weeks-6 months) is 80 hours and this reduces to 2.5 hours by the time the baby is six months old.

It is interesting to note that the increased metabolism time for caffeine in newborns may relate in part to the effects of breastfeeding. Some components of breastmilk are thought to inhibit the function of cytochrome P450, the cytochrome which metabolises caffeine.

Recommendations for caffeine consumption during breastfeeding

Health effects for the mother of excessive caffeine consumption during breastfeeding

For lactating women, evidence suggests that excessive caffeine consumption is associated with:

Health effects for the baby of excessive caffeine consumption during lactation 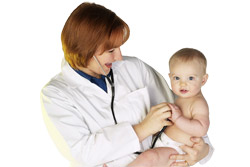 While research evidence is lacking, health professionals who work closely with breastfeeding women believe that infants breastfed by women who are heavy caffeine consumers are more likely to experience the following health problems:

Excessive caffeine consumption by a breastfeeding woman changes the composition of her breastmilk. In particular, research has shown that the breastmilk of heavy coffee consumers contains approximately one-third less iron than the breastmilk of women who do not consume caffeine. Women who consume caffeine and their babies have also been shown to have reduced levels of haemoglobin (the component of blood responsible for oxygen transport) and haematocrit (red blood cell) levels, both of which are affected by iron concentrations. Iron deficiency can lead to conditions such as anaemia.

One study which compared the teeth of baby rats breastfed by mother rats who were and were not given caffeine supplements, reported a higher rate of dental cavities in babies fed by the rats on caffeine supplements. However, studies have not been conducted to investigate the effects of caffeine use in breastfeeding and the dental health of human babies.

Breastfeeding women should consume no more than 300mg (about three cups of brewed coffee) each day.Women who consume more caffeine than this may find it difficult to reduce their intake and should reduce their caffeine intake gradually to avoid withdrawal symptoms. For example they might replace one caffeinated beverage with a non-caffeinated beverage each day, until their caffeine consumption is below the recommended level.