What is Bird Flu (Avian Influenza) 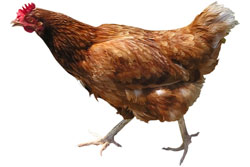 Bird flu or avian flu is an infectious disease of birds caused by type A strains of the influenza virus. Bird flu, which was first identified in Italy more than 100 years ago, occurs worldwide.
Fifteen subtypes of influenza virus are known to infect birds, thus providing an extensive reservoir of influenza viruses potentially circulating in bird populations. To date, all outbreaks of the highly pathogenic form have been caused by influenza A viruses of subtypes H5 and H7.
Within a country, bird flu can spread easily from farm to farm. Large amounts of avian flu is secreted in bird droppings, therefore contaminating dust and soil. An airborne virus can spread bird flu from bird to bird, causing infection when the avian flu is inhaled.
Contaminated equipment, vehicles, feed, cages or clothing – especially shoes – can also carry bird flu from farm to farm. Avian flu can be carried on the feet and bodies of animals, such as rodents, which act as “mechanical vectors” for spreading the bird flu. Limited evidence suggests that flies can also act as mechanical vectors.

There are several types of avian influenza, those that cause infection and even death in humans are called highly pathogenic avian influenza (HPAI). The strain of the virus that is currently causing outbreaks in humans is called the H5N1 strain.

Confirmed instances of avian flu viruses infecting humans since 1997 include: 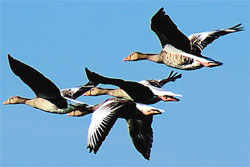 Experts say bird flu is probably spread by migrating birds. The affected people are thought to have caught avian flu from direct contact with infected poultry.
Infected birds shed the bird flu virus via their saliva, faeces, or nasal secretions. Birds can become infected when they have contact with surfaces contaminated with excretions, or contaminated excretions themselves.
Apart from being highly contagious between birds, avian flu viruses are readily transmitted by mechanical means, such as by contaminated equipment, vehicles, feed, cages, or clothing. Highly pathogenic viruses can survive for long periods in the environment, especially when temperatures are low.
Fears persist that bird flu could combine with a human flu virus to become a deadly disease that could spread among people. There is also concern that avian flu may have crossed into other species after the deaths of a rare leopard and two domestic cats in Thailand.

For information on avoiding flu, see Tips to Prevent Colds and Flus.

Based on data from six of the cases of bird flu, the median time between exposure to avian flu and onset of illness is 3 days (range 2-4 days). In these ten patients, the mortality rate was high, with death occurring a mean of 10 days after onset of bird flu.
However, these cases were identified by alert clinicians in tertiary care hospitals and cannot be taken to be representative of the full range of illness that H5N1 may cause.

The prognosis for avian flu varies greatly. History would indicate that the initial bird flu prognosis is good, but the deadly strains of the avian flu mutate quickly and can often have associated mortality rates as high as 90%.

Two classes of bird flu drugs are available. These are the M2 inhibitors (amantadine and rimantadine) and the neuraminidase inhibitors (oseltamivir and zanimivir). These bird flu drugs have been licensed for the prevention and treatment of human influenza in some countries, and are thought to be effective regardless of the causative strain.
However, initial analysis of avian flu isolated from the recently fatal cases in Vietnam indicates that the viruses are invariably resistant to the M2 inhibitors. Further testing is under way to confirm the resistance of amantadine. Network laboratories are also conducting studies to confirm the effectiveness of neuraminidase inhibitors against the current H5N1 strains.
Current bird flu vaccines, when administered to high-risk groups such as poultry cullers, protect against circulating human strains. Avain flu vaccines reduce the threat of infection from human and avian viruses simultaneously for those who are at high risk of exposire. Dual infections give the avian and human viruses an opportunity to exchange genes, possibly resulting in a new influenza virus subtype with pandemic potential.
Annual bird flu vaccines are produced for routine use in protecting humans during seasonal epidemics of influenza. They offer no protection against infection by the H5N1 avian virus.
WHO has issued guidelines for the vaccination, using the current trivalent influenza vaccine, for groups considered at high risk of exposure in countries experiencing outbreaks of highly pathogenic H5N1 avian influenza in poultry.
Travellers to countries in Asia with documented H5N1 outbreaks should avoid poultry farms, contact with animals in live food markets, and any surfaces that appear to be contaminated with faeces from poultry or other animals.

Everything You Need to Know About CTPA Scans…