Gestational trophoblastic disease (GTD), also known as molar pregnancy, is a range of pregnancy related tumours. Molar pregnancies occur when the placenta (or afterbirth) of a defective pregnancy transforms into a tumour. It can occur following normal or abnormal fertilisation. The tumours are unique because they arise from placental tissues and therefore contain maternal and paternal genes (whereas most tumours arise only from the tissues of the individual in which they are found).They can be either benign (i.e. non-cancerous) or malignant (i.e. cancerous). Benign forms of GTD are known as hydatidiform moles, whereas cancerous moles are known as gestational trophoblastic tumours, or gestational trophoblastic neoplasia.

Benign GTD tumours are either complete or partial hydatidiform moles. They represent incomplete pregnancies in which the placenta grows but the embryo (i.e. the foetus) does not. In a normal pregnancy, a single chromosome from each of the mother (egg) and father (sperm) join to form an embryo which is surrounded by the placenta. It develops into a foetus and is then born as a baby. In molar pregnancies this process of fertilisation is defective.

A complete hydatidiform mole is an androgenetic pregnancy (i.e. a pregnancy which contains only paternal and non maternal chromosomes). These pregnancies occur when a single sperm fertilises an “empty” egg (i.e. an egg containing no DNA) and then duplicates its own chromosomes (rather than joining with the maternal chromosome, as is the case in a normal pregnancy).

Partial hydatidiform moles are known as triploid gestations (i.e. pregnancies that have two paternal and one maternal chromosomes). They occur when two sperm fertilise a single egg. Partial moles sometimes coexist with a foetus. In such instances the foetus will usually have congenital abnormalities and be unviable (i.e. it will not survive). In rare instances a normal foetus will co-occur with a molar pregnancy, in which case there is the possibility of preterm birth.

Hydatidiform moles are benign and confined to the uterine cavity, however in about 10% of cases they develop into malignant tumours. Malignant GTD tumours are either:

These malignant forms of GTD most commonly occur after a previous benign molar pregnancy, however they can also occur after an apparently normal pregnancy (either carried to term or terminated through spontaneous or induced abortion) or an ectopic pregnancy. The extent and sites of metastasis vary depending on the type of tumor: 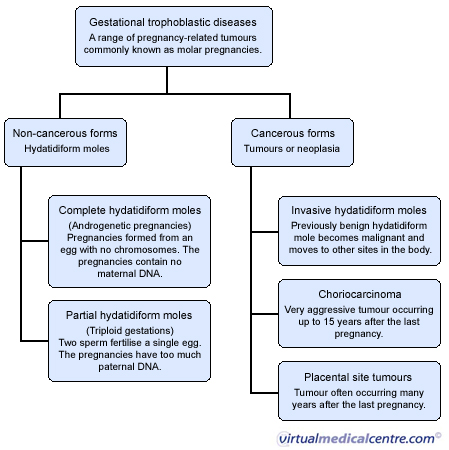 In Australia it is estimated that one in 1500 pregnancies is affected by hydatidiform mole.

All women of reproductive age who have previously been, or are currently pregnant, are at risk of GTD, however women younger than 16 or older than 40 who become pregnant are more likely than women aged 16-39, to develop a molar pregnancy.

There is a one in three chance of GTD in women aged over 50 who become pregnant. Other factors which predispose women to GTD relate to genetics and reproductive history. These include:

Benign hydatidiform moles occurs following any type of previous pregnancy, however they most commonly occurs following other molar pregnancies. Scientists are still investigating exactly how placental tissues go on to form moles, however the most likely cause is defective fertilisation, which leads to an abnormal pregnancy, in which the placenta grows, but the embryo does not.

Once formed, a hydatidiform mole can either:

GTD characterised by malignant trophoblastic tumours is often a result of the transformation of hydatidiform moles, however when it occurs concurrently with a normal pregnancy, there is no clear explanation regarding the cause of the disease. Scientists are still investigating the mechanisms by which benign tumours transform to become malignant.

The most common symptom of molar pregnancy is vaginal bleeding and many women go to the doctor thinking they are having a miscarriage. Other symptoms include abdominal pain and excessive nausea and vomiting (more than normal during early pregnancy). However many women with a molar pregnancy do not display any symptoms.

If the tumour has spread, symptoms include:

If a doctor suspects GTD, a physical examination of the pelvic area will usually be performed. An enlarged uterus (i.e. a uterus that is larger than normal for the stage of pregnancy) is the most common physical sign of GTD and this may prompt a doctor to undertake further diagnostic tests.

A definite diagnosis of GTD can only be made if placental tissues are removed from the woman’s body for examination in a laboratory. As this involves surgery, it is normal for a doctor to perform a number of other tests prior to performing surgery.

Taking measurements of the hormone human Chorionic Gonadotrophin (hCG) (levels of which are elevated during pregnancy, and behave abnormally during a molar pregnancy) can give a doctor a good indication of whether or not GTD is possible.

Transvaginal and transabdominal ultrasound are also commonly used diagnostic tools, which enable doctors to see signs of molar pregnancy (e.g. an abnormal placental mass). The doctor will take an ultrasound of the areas likely to be affected if a molar pregnancy is in fact occurring, and examine the ultrasonic images for evidence of GTD. 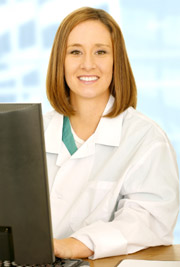 In the past GTD was often fatal. However, medical advances in the past 50 years mean that the disease is now invariably curable.Almost 100% of patients with benign tumours, or metastatic tumours are successfully cured and most women retain their fertility following treatment. 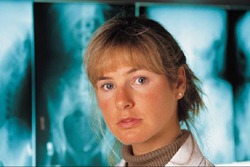 Following a definitive diagnosis of GTD, a doctor will normally classify the tumours as low or high risk, in order to determine the best treatment for each patient.

There are two types of surgical techniques which can be used to treat non-metastatic GTD, dilatation and cutterage and hysterectomy.

Dilatation and cutterage is a process of evacuating abnormal tissues from the uterus. It involves a doctor opening the vagina using an instrument known as a speculum, so that the cervix is visible. The cervix is then dilated so that the uterus can be accessed. An instrument called a curette is then used to scrape the walls of the uterus. Following this procedure a doctor will normally measure a patients hormone levels for 8 weeks to a year to ensure that the treatment has been fully successful. If hormone levels rise, further treatment, often with chemotherapy may be needed.

Hysterectomy is sometimes used to remove benign moles when the woman being treated does not wish to have anymore children. Hysterectomy may also be used to treat placental site trophoblast tumours which are often resistant to chemotherapy.

A doctor will usually commence chemotherapy as a last resort, due to the toxic effects of chemotherapy medications. However, even as a last resort, chemotherapy will be required in some 8% of patients with benign moles (approximately 15% of complete and 0.5% of partial mole patients). This is when surgery is unsuccessful and the moles return following the surgical treatment.

A doctor will usually assess a patient’s risk of treatment failure, using a system design by the World Health Organisation to assess the risk of treatment failure for GTD. In patients with a low risk score, single agent chemotherapy is usually prescribed. A drug known as Methotrexate is the most commonly prescribed in these circumstances. However there is a risk that patients will become resistant to single agent chemotherapy (i.e. the medication will stop working).

Women should not become pregnant again for at least six months after their treatment has been declared successful. The use of oral contraceptives is safe following successful treatment of GTD.