What are breasts and what is their function? 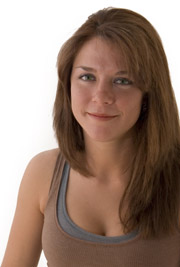 The breasts are specialised organs, which are located on the anterior chest wall. The female breast is more developed than the male breast, as their primary function is to produce milk for nutrition of the infant and baby. There are lots of glands in our breasts, which grow and develop during puberty and maturation. Female hormones such as oestrogen and progesterone are important in promoting growth and changes that occur in the breast, especially during pregnancy and the menstrual cycle. Lying in a superficial layer of our skin above our chest muscles, the mammary glands in our breast drain via many ducts to our nipples. There is a dark, circular layer around the nipple, called the areola.
It is important for women to understand the normal anatomy and function of their breasts so that any abnormalities can be detected and treated.

The breast consists of:

Female breasts are rarely symmetrical. In most cases, a breast is usually slightly larger or smaller, higher or lower or of different shape to the other side. When fully developed, the female adult breast is composed of 15–20 lobes of branching glands. These lobes are separated by bands of connective tissue, which radiate out from the nipple like spokes from the middle of a bicycle wheel. There is lots of fat tissue within the breast. The amount of fat determines the size of the breast. The fatty tissue gives the breast its soft consistency.
The special glands in the breast are called tuboalveolar glands, which are modified sweat glands. Each of these glands end in a lactiferous duct (2–4 mm in diameter) and opens up through a small hole onto the nipple. Deep to the areola, each duct has a dilated part called the lactiferous sinus, in which milk can accumulate and remain in the nursing mother. Cells which are important in contraction movements, called myoepithelial cells, are present in the gland and help in secreting fluids. 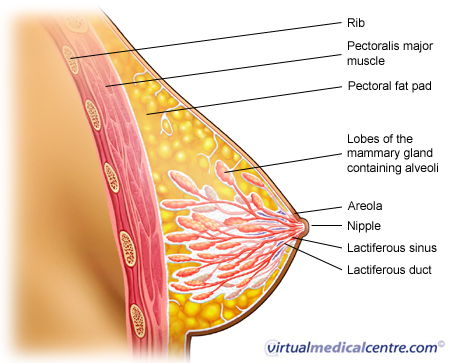 Nipple and areola structure and function

The nipple and areola are the darker areas of the breast. The nipples contain no fat, hair or sweat glands. There are many smooth muscle fibres in tissues of the breast, which are specially arranged to help the nipple to become erect when stimulated. During puberty, the pigment in the nipple and areola increases and the nipple becomes more prominent.
Within the areola, there are sebaceous glands, sweat glands and modified mammary glands (glands of Montgomery). These glands produce small elevations on the areola surface. The sebaceous glands enlarge during pregnancy and secretes oily material, which acts as a lubricant for the areola and nipple.

Vasculature of the breast

Arteries carry oxygen-rich blood from the heart to the chest wall and the breasts, while veins take de-oxygenated blood back to the heart.
The arterial supply of the breast is from:

During pregnancy, many changes occur in the breast, to prepare for the baby and produce milk. Cells in the glands of breast tissue change shape and increase in size and number. The areola enlarges and becomes darker.
Later in pregnancy, subsequent increases in breast size occur through cells which secrete milk products and these secretory products accumulating in the ducts. A special thick white/yellow fluid called colustrum is produced in the breast during the last few weeks of pregnancy and first few episodes of nursing. This is rich in protein and agents which protect the baby from harmful substances such as bacteria.

During puberty, growth and development of the breast occurs due to oestrogens and progesterones. After this development, changes in breast morphology occur during the ovarian cycle due to hormonal fluctuations.
During pregnancy, oestrogen and progesterone produced by the corpus luteum stimulate proliferation and development of the breast. Prolactin (produced by the adenohypophysis), somatomammotrophin from the placenta and adrenal corticoids also play a role during pregnancy.
After delivery, levels of circulating hormones decrease with degeneration of the corpus luteum and the placenta. Milk secretion is stimulated by increased prolactin (as a neurohormonal response to suckling) and adrenal cortical steroids. Oxytocin is also produced, which stimulates contraction of myoepithelial cells in the mammary glands to eject milk.
With absence of ovarian hormones after menopause, breast glands atrophy and secretory cells of the alveoli degenerate. Connective tissue also shows degenerative changes with a decrease in stromal cells and collagen.